Greetings Loyal Airmen, as many of you know, the Air Chief has currently been working with artist Mike Belcher to produce a brand new graphic novel starring the classic pulp hero, the Black Bat. 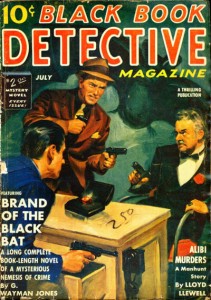 Inspired by the pulp novel “Brand of the Black Bat” written by Norma Daniels and published in 1939. Mike and the Air Chief had hoped to take that origin story and adapted it to a comic story. Unfortunately Daniels story, though much fun, is a pretzel of twists and turns that simply doesn’t work in comic format which relies on a more straight line narrative. That being the case, we soon realized we would have to create something new from something old. In the end, it will be our readers who decide if we succeeded…or not. And so it begins.  Above to the left is the first appearance of the character in the magazine Black Book Detective. On the right the credit page and sketches of Tony Quinn in his civilian disguise as blind lawyer Tony Quinn, then with the hood on as the vigilante Black Bat, below them, Quinn’s right-hand man and valet, Silk Kirby and his secretary, girl-Friday, Carol Baldwin. The only member of the Black Bat’s team not present is ex-boxer Butch O’Leary, though trust us, he will be in the book along with a brand new member Mike and the Air Chief are very eager to debut. Still tight Loyal Airmen, as time goes by, we will be sharing lots of artwork as the progress starts to take shape. 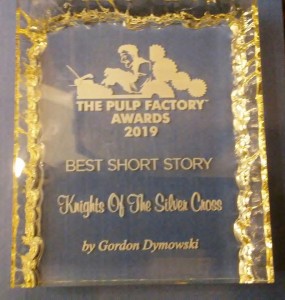 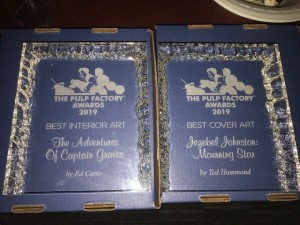 Well, Loyal Airmen, it’s that time of year again when the members of the Pulp Factory Group vote for the best New Pulp fiction and artwork from the previous year. Above are pictures of three of the five awards handed out last year. Sadly due to the pandemic, they had to be mailed to the winners and such will also be the case this year. On March 7th the nomination phase of the process concluded and now the Awards Committee is tabulating all those nominations. The biggest vote getters in each category will be put on the official ballot and then announced to the public at large to vote on. The Air Chief and artist Rob Davis will be doing a special 15 You Tube video to make this announcement. Whereas the venue at which these awards are presented, the Windy City Paper & Pulp Convention, isn’t until in Sept this year (again due to the pandemic) ergo the awards will once again be mailed out to the winners. Hopefully come 2022, we’ll all be on track and we can have both that convention once again in the Spring and thus do the presentation there as we have in the past. That’s it. Stay tuned. We’ll happily share more as it develops.

And finally for those of you Loyal Airmen who enjoy audio books, as of this morning Radio Archives is offering BASS REEVES Frontier Marshal Vol 4 as an audio book you can buy either as a streaming download or CD set. Radio Archives always does such a great job with these.

And that’s our Flight Log for this week. Thanks always for stopping by and we’ll see you back here next Friday.