A BIRTHDAY IN HEAVEN

Greetings Loyal Airmen, we have such a wonderful story to share with you today. It’s truly amazing and beautiful…if you’ve are a believer. 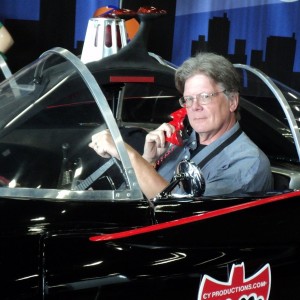 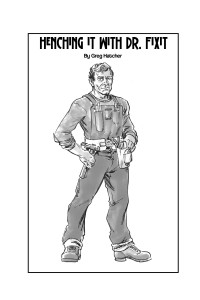 In 2021 we lost one of Airship 27 Production’s finest writers, Greg Hatcher at the young age of 60. In the past few years, Greg had given us three stories featuring his original character, Dr. Fixit; a fellow who made fantastic weapons for super-villains. Yeah, a wacky idea, but Greg made it work. When Greg died, he left behind one last Dr. Fixit tale which he never got to finish. His wife, Julie, made us aware of this fact and so Art Director Rob Davis and the Air Chief decided we’d find someone to finish that story and then collect it with the previous tales and publish a book in Greg’s honor. The writer we recruited to complete the last story was one of the best in New Pulp, our good buddy Fred Adams Jr. Then one of Greg’s own talented friends, artist Christ Kohler, volunteered to draw the cover with Rob coloring it. So we started working on it in earnest.

Last Sunday morning, Nov 13th, the book was posted to Amazon and is now available there in both paperback and on Kindle. Of course, as always, the Air Chief, began spreading the cover and press release all over the internet to let folks know the book was available. And while on Facebook, we note something that about knocked us out of our chair….Nov 13th was Greg’s birthday!!!  No lie!!! We got the out on what would have been his 61st birthday!  And still was, only this time, our friend Greg was able to celebrate it in heaven with the angels. Please don’t tell us it was a coincidence. There are no such things, only a loving God who smiles on all of us.

As most of you Loyal Airmen are well aware, the Air Chief has been sitting on a 130 pg Brother Bones graphic novel manuscript for several years now. In that time a few brave artists have stepped up to take a shot at illustrating it, but alas they quickly bowed out. This script, for the first time ever, tells the entire origin of the Undead Avenger in comic form and obviously we’ve been disappointed at not being able to recruit an artist to bring it to life. So while at the Rocky Mountain Con two weeks ago, one of our many artists friend here in Fort Collins inquired as to if  we had a new Brother Bones projects in the works. We grimaced and explained about the graphic novel script collecting dust in our files. Note, this fellow had already done a short Brother Bones comic and really likes a great character a great deal. Enough, it seems that after getting home, he wrote saying he might be interested in taking on the project, were it to be launched as Kickstarter campaign. We’re not adverse to such, though in all honesty we’ve never been fans of such funding programs. Anyway, we sent him the script and quite a few character sketches previously done by Rob Davis. Two days later, this artist sent us the first four pages of the script in roughs. Apparently he’s having fun reading the script, and is very much interested in taking it on. Don’t want to jinx it just yet by revealing who. But we are excited at the possibility and we’ll certainly keep you posted as things develop. 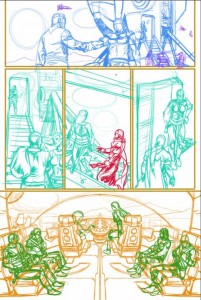 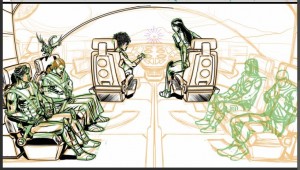 We already showed you page 15 in progress by Andrea Bormida. This week he’s defining the last panel, defining the team members as they all buckle up aboard N’Atelle’s speedy space ship. 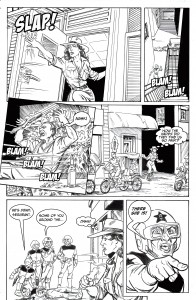 Princess Kumana is on the run from Roman troops in this, Pg # 16 of THE BOSTON BOMBERS Vol 2 – story by the Air Chief. Art by the amazing Rob Davis. Oh, yeah. 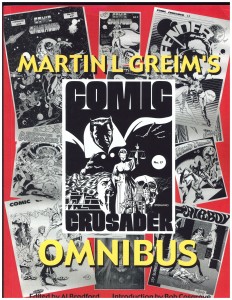 In 1968 we left the army and returned to civilian life in our hometown of Somersworth, NH. We were 21 at the time. Little did we know then that in nearby Dedham, Massachusetts, a comic fan named Martin Greim was in the process of launching his very on fanzine (amateur magazines devoted to comics) to be called Comic Crusader. He would be aided by two fellow fans, Bob Cosgrove and Al Bradford. Within the next year, the Air Chief, through various sources, learned of the magazine and began purchasing copies as soon as new ones were finished. Fanzines were testing grounds for would be writers and artists looking to become professionals. During those years, we had become correspondent pals with then new comic pro artist Joe Staton who worked Charlton Comics. His first real series for them was called PRIMUS based on a TV show about a scuba diver. When Joe agreed to let us interview him for publication, we immediately contacted Greim and asked if he’d be receptive to publishing such an interview. He was only too eager to do so. Then Joe went and did an original sketch to accompany the interview which appeared in issue # 13 which featured a cover by Jim Steranko. Believe Loyal Airmen, in those days Comic Crusader had stuff from lots of folks just breaking into the business such Tony Isabella, Gary Kato and so many others. All names you’d easily recognized. Sadly Martin Greim passed away a few years ago and all his material became part of his estate managed by his two surviving daughters. Earlier this year, Cosgrove and Bradford got their permission to publish an omnibus edition and make it available on Amazon. This whopping book is well over 350 pgs and contains every issue of Comic Crusader except for the very first one, which Cosgrove reports in his intro to the collection is now lost forever.

Wherein we re-united with Joe and his wife Hilary, two weeks ago at this year’s Rocky Mountain Con, we realize then that we had to get a copy of this wonderful tome. Our own copies of the original issues are buried somewhere in the our tomb of stuff. Chuckle. Still at $25, this piece of comic book history was well worth picking up. Just flipping through it has brought back so many memories…and there’s that interview we did with Joe (see above right). Our very first ever published comic related project. WOW. 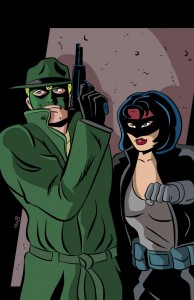 PRESS RELEASE –  Ron Fortier, Mike Belcher & Aiden Belcher have produced a brand new original Green Hornet comic strip as fan fiction in a PDF. Anyone wishing a copy can have it for free merely by writing either Ron (airship27@comcast.net) or Mike at (amk_designguy@yahoo.com). Again this is fan fiction and there is no charge. Merry Christmas Green Hornet fans!

And there you have this week’s Flight Log, Loyal Airmen. Thanks for stopping by and see you next week. God bless.