Greetings Loyal Airmen. Before anything else, the Air Chief wants to thank all our friends here in Fort Collins who turned out in the hundreds to visit us at Gryphon’s Games & Comics. It was the biggest, splashiest Free Comic Book Day we’ve ever experienced. We sold tons of comics and met so many great people. It was a blast. Among folks we saw was our artist pal, Brian Loner, who dropped off a copy of the DEATH DERBY comic he finally finished and put together. Which is our first topic of the week. 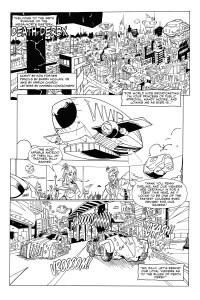 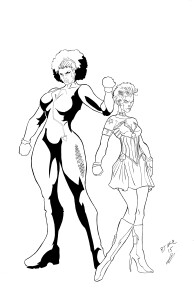 Several  years ago we our pal Todd Jones was hoping to do an issue of his comic anthology series WICKED AWESOME TALES devote to manga-style strip. To that end, we wrote a short story called DEATH DERBY in which this crazy, wild auto-race was held in the public streets of a giant metropolis with absolutely no rules. It was our version of all the crazy Japanese anime series we’d seen. Our two lead character would be two really tough ladies, Bad Betty and Kathy Kadaver. Shortly after finishing the strip, artist Barry McClain offered to draw it for us and put together not only a nice pin-up sketch of the gals, but actually finished page # 1. See above. And then, for various reasons, sadly had to drop out of the project. More time passes and then one day, artist Brian Loner asked if we might have a script for him to play with. 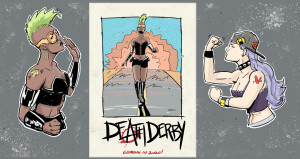 Brian loved the strips and didn’t waste any time whipping up his version of the characters. 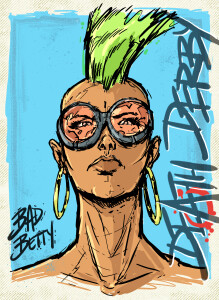 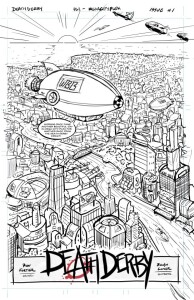 The thing is Brian wanted to expand on the visuals. He wanted to make the story longer by using less panels per page and adding others, so that ultimate the story had the potential to fill an entire comic issue. Above is his version of page # 1. 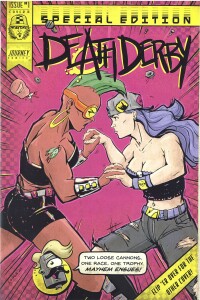 Above is the completed DEATH DERBY comic as created by the Air Chief and artist Brian Loner. The book is black and white with two different covers, each on the flip side of the other as seen above here. At the back of the story itself, Brian has included at least six pages of his early sketches which are way cool to see. If you’d like to pick up a copy go to (www.brianlonerart.com) That’s where you’ll find it. Meanwhile we’re going to talk a bit about the possibility about sequels. Stay tuned. 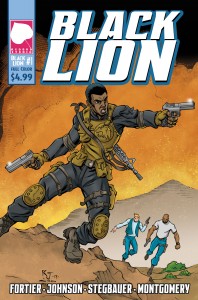 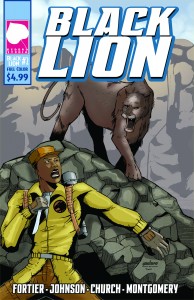 So next up Loyal Airmen is progress on the fourth and final issue of BLACK LION. Warren Montgomery had been doing our lettering and cover coloring. About a month ago, having seen some of Warren’s new artwork on Facebook, we suggested he do the cover to issue # 4. He jumped at the chance and began sending in some roughs and pencils. 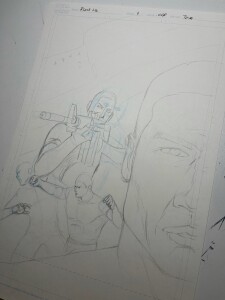 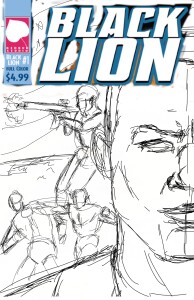 First he did a loose rough and then did up a mock-up like cover. This was the beginning. 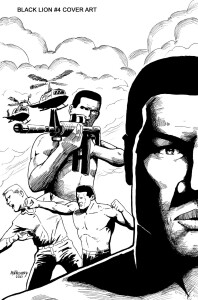 One he worked out the composition he wanted, he did full tight pencils. Then came the inks and finally the covers, as seen in the three pieces above. We love it and think once the logo is added, it will make a great cover to wrap up the series. Note, as of now half the book is finished and artist Kevin Johnson is hard at work on the last half. We hope to have the issue out within a few months. Then some time in 2022 we’ll collect them all in a big old graphic novel. Stay tuned, Loyal Airmen. 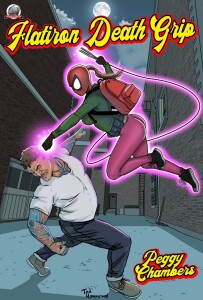 Now to pulp stuff. Airship 27 Productions is thrilled to announce the release of our 241st title, “Flatrion Death Grip” by writer Peggy Chambers. A New York beautician becomes a vigilante by night and battles werewolves and vampires. This pulpish fun adventure is a romp with interior illustrations by Gabriella Saenz and a great new cover (see above) by Ted Hammond. Now available at Amazon in paperback and soon on Kindle. As always, thanks so much for your support. 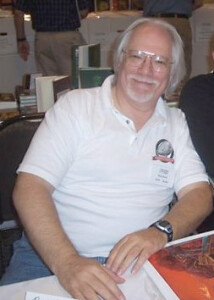 Finally, if you happen to be anywhere near Kansas City this weekend, you might want to go and enjoy Planet Comic Con, a great comic con with tons of guests, including our very own Art Director Rob Davis. This is Rob’s “home con” and he has attended it every year since its inception. So stop by  his table, tell him hello and get him to draw a sketch for you. You’ll be glad you did.

And there you have this week’s Flight Log Loyal Airmen, be well and we’ll see you here next Friday.