Greetings Loyal Airmen, we’ve got a bunch of stuff to share with you this week. So here we go. 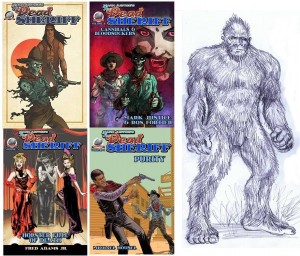 We at Airship 27 are happy to announce we are preparing to do another volume of “Mark Justice’s The Dead Sheriff.” As many of you already know, Mark was a fellow writer and radio DJ (above right) who created the zombie lawman shortly before he passed away seven years ago. Since then, working with his wonderful wife, Norma Kay, we’ve put out four Dead Sheriff novel. The first being the original written by Mark. The second based on his unfinished manuscript which we completed. This was followed by volume three by writer Fred Adams Jr. and volume four by Michael Housel. Now California based writer Phillip Pan has completed a fifth and we hope to have it out withing a month. Art Director Rob Davis is currently doing the interior illustrations and Michael Youngblood will do the cover. In this one the Dead Sheriff finds himself and his companions in Canada coming face to face with Bigfoot. Trust us, Loyal Airmen, this one is a hoot. Stay tuned. We’ll keep you posted. Meanwhile a reminder, the previous four volumes are still available from Amazon in both paperback and on Kindle. 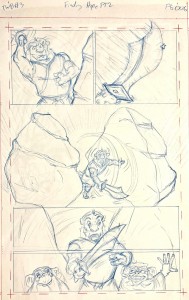 Artist Olivia DeGaine continues her work on our series about the traveling warrior Raizee the Ram. These pages are part of issue # 3 now in production and we love them. Olivia is a master storyteller. 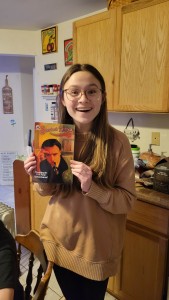 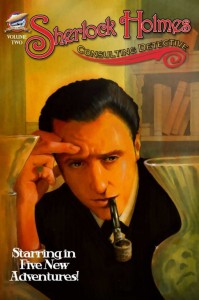 Last week we sent our third cousin Blake Fortier copies of our Mr. Jigsaw comic. His older sister, Natalie, loves mysteries, ergo we sent her one of our Airship 27 Sherlock Holmes – Consulting Detectives anthologies. By that smile, we gather it was a big hit. You’re welcome, cousin.

ANOTHER SET-BACK FOR SATIN 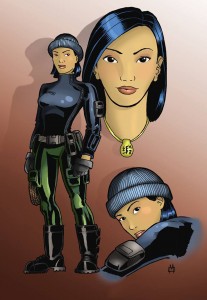 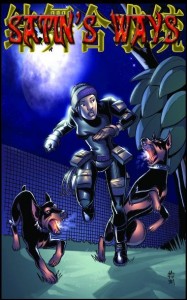 Satin Wei is a character we created ages ago for the late Gary Reed and his Caliber Press. We wrote a 48 pg actioner introducing this love jewel thief from Hong Kong. Sadly, we could never find an artist willing to take that on. This morning the fourth artist to show any interest in the past twenty years dropped out. Sigh. And so it goes in the life of a comic book writer. One step forward, two steps back. 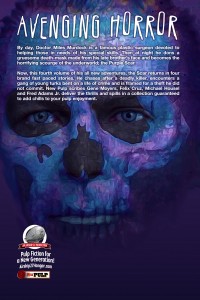 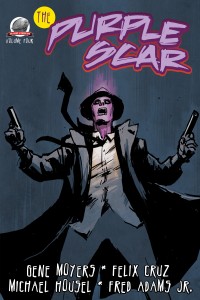 And on a much happier note, we’re happy to announce the first new pulp release of 2023 from Airship 27 Production is THE PURPLE SCAR Vol 4 – A great anthology featuring the weirdest, scariest pulp avenger of them all, the Purple Scar. Above is the back cover (left) and the front cover (right) by artist Adam Shaw. Features four great chilling adventures by Gene Moyers, Felix Cruz, Michael Housel and Fred Adams Jr. with interior illustrations by Chuck Bordell. Art Director Rob Davis designed it all. Now available at Amazon in paperback and soon on Kindle. As ever, Loyal Airmen, thanks for your continued support. 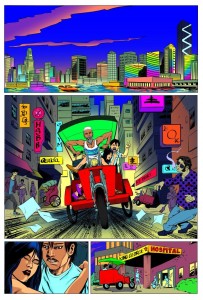 And finally this week we are thrilled to have super comic colorist back at work on our spy action series JIN & TONIK, as written by the Air Chief and illustrated by the amazing Cesar Feliciano. Always a creator in demand, Matt is working on several projects simultaneously and so had to leave us for a while to meet his other obligations. But he’s back again (even for a little while) and as ever his work on Cesar’s pages is fantastic.

And there you have it, Loyal Airmen. Another busy, hectic week at Hangar 27. As ever thanks so much for stopping by and we’ll see you all back here next Friday.