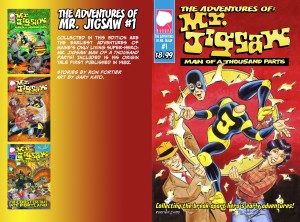 Greetings Loyal Airmen, some of you may recall we talked about the fact that Redbud Studio was doing new editions of our ADVENTURES OF MR. JIGSAW.  Well the re-done volume # 1 is now officially up at Amazon. It contains the first 3 issues of the regular series.  Fingers crossed volume # 2 will soon be on its way. Stay tuned. 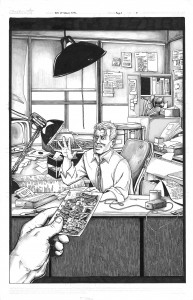 While on the pulp front, artist Clayton Murwin continues to turn in gorgeous illustrations which will appear in the upcoming novel THE EYE OF DAWN by writer Brad Sinor. This is Clayton’s first work for Airship 27 and we are totally wowed by how great it is. Ala the sneak-peek above. His attention to details is fantastic.  With luck we should have this title within the next month. 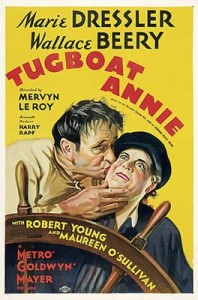 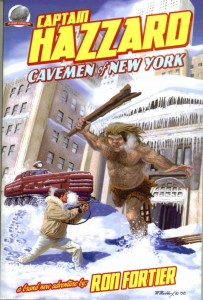 When we were much younger we spent a great deal of time watching old black and white movies on television. We have fond memories of a comedy series based on a character called Tugboat Annie. She first appeared in a Saturday Evening Post story written by Norman Reilly Raine which were supposedly based on the life of Thea Foss of Tacoma, Washington. The story was about a cantankerous female tug skipper and her crew of lovable misfits. In 1933 MGM and director Mervyn LeRoy brought her to cinematic life. The movie starred Marie Dressler and Wallace Beery, on of the studio’s most popular screen team at that time. The film was successful enough to be followed by two sequels, “Tugboat Annie Sails Again,” and “Captain Tugboat Annie.” They were cast with different actors.

We bring this up because the films were so lighthearted and fun, our memory of them resurfaced several years ago when penning CAPTAIN HAZZARD – Cavemen of New York. In it, our plot called for Hazzard and his crew to get into Manhattan via water route and just like that we remember Annie and her tug. And so with very little disguising, we brought her into the story and gave her a cameo. To this date only a very few of our Loyal Airmen recognized the tough and lovable Annie. And that Loyal Airmen is how we have fun writing.

That’s it for this Flight Log, as ever thanks so much for stopping by and we’ll see  you next Friday.