Greeting Loyal Airmen.  As you read this week’s Flight Log, the Air Chief is in Lombart, Il, at the Windy City Pulp & Paper Con. Keeping our fingers crossed many of you will also be in there. For those of you who couldn’t make it, we wanted to leave you with some very neat sneak peeks at up and coming projects we’ve been involved with. 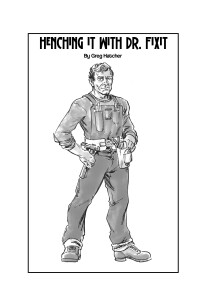 One of our most popular book series in the past few years has been MYSTERY MEN (& Women) in which writers debut their own original heroes…or villains. In Vol 6 of this series which we released last year, writer Greg Hatcher gave us Dr. Fix-It, a genius mechanic who makes gadgets for the super villains. The story was much fun and as he always does, Art Director Rob Davis not only illustrated it, he also did up a pin-up sketch of the character. Dr. Fix-It is one Ernie Voskovec and he’s a really terrific character with lots of tales to tell. 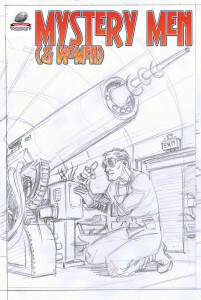 So when Greg turned in a second Dr. Fix-It story for Volume #7, the Air Chief began thinking we should feature Ernie on the cover of this book. And our idea was to recruit artist Adam Shaw to bring it to life. Adam has done some stunning covers for us and never disappoints. His work is beautiful. But at the same time he wasn’t familiar with the character, so as we’ve done in the past, Art Director Rob Davis did up a quick pencil sketch of what we’re looking for in the finished cover and sent it off to Adam. (See above.) We thought you Loyal Airmen would love seeing this preliminary work. Adam won’t copy Rob’s piece, but use it to inspire his own interpretation. Which of course all of you will see when the book is completed and published. 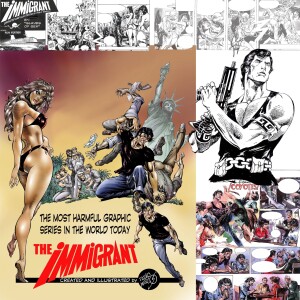 Years ago the Air Chief has the privilege with Pablo Marcos, one of the finest graphic artists in the world today. Over his long career Pablo has worked with ever major comic company and done some of the most popular characters known to fandom. In our association together, we did a short strip that appeared in a Frazetta’s Sword & Sorcery magazine. Later, Pablo had the idea for a series to be called The Immigrant for which the Air Chief wrote a few script pages to test out the concept. Sadly we couldn’t find any publisher will to take it on. After living in the states for many years, Pablo has returned to Columbia and is now building his own web-site where he will be available for commission. You can find it at (www.PABLOMARCOS.com) Tell the Air Chief sent you.

And that Loyal Airmen is a wrap. Next week we hope to have a bunch of pictures from Windy City and some great stories to related. Till then be well and stay safe.