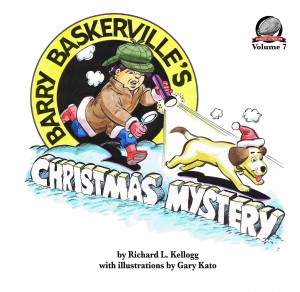 Greeting Loyal Airmen, and welcome to this week’s Flight Log. One in which we are happy to announce the release of newest Barry Baskerville children’s book, “Barry Baskerville’s Christmas Mystery.” Written by Richard Kellogg and illustrated by Gary Kato, this is the family friendly series about a young boy who wants to be Sherlock Holmes when he grows up.  Pretty much the old boy detective concept done with a nice twist. In this, Barry’s seventh case, he is after someone stealing outdoor Christmas trees from people’s front yards. As ever it is a fun read with over 30 colorful illustrations showcasing Gary’s amazing artwork. It, like the previous six Barry Baskerville books, is now available from Amazon in both paperback and on Kindle. If you have young readers in your family, we totally recommend you pick this up for them. They will love you for it. 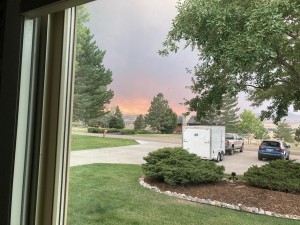 Over the last few weeks, Colorado, like California, has been dealing with severe heat on the 90s that ultimately led to dozens of major forest fires all over including the Peaks Canyon blaze taking place behind Fort Collins. For weeks a smoky haze lit up the sky as seen from my office window. Then this past weekend it became so bad that by Monday, Labor Day, a giant black cloud of soot covered the entire area including surrounding communities. The photo above was taken the night before. Driving around seeing the black sky over head was like something out of a disaster. Ash fell out of the sky like rain covering everything and making breathing dangerous.

Then on Monday night, like a gift from God, northern winds whipping down from Canada drop temperatures drastically and a mixture of rain and snow began falling. By Tuesday morning this was the view out our window. As we write this entry, it continues to fall and one can’t help but believe it is dampening those fires considerably. Hopefully enough to eventually put them all out. 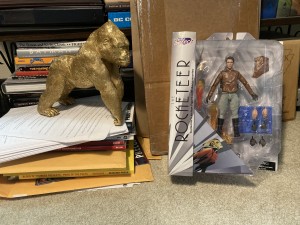 Finally, to end on a fun note, two new toys have found their way into the Air Chief’s innner sanctum. The Golden Gorilla was found by Valerie at a local Holmeswood Store in town and then the new wonderful Rocketeer figure was a gift from our dear pal, Todd Jones. Todd saw it at a local store a while back, knew of our loved of the character and picked it up for us. And there you go, two more toys for this senior little boy. Things like this keep our hearts forever young.