Greeting Loyal Airmen, we’ve some big news for all of you this week, but we’re going to save that for last and go out with a bang. First up more on the Air Chief’s varied comic book projects. 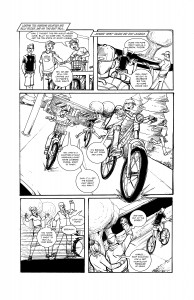 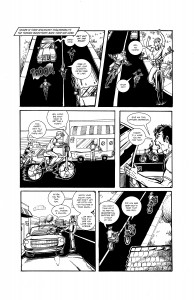 BULLDOZER is a story we wrote ages ago when still living back in New Hamsphire. It is about what happens to three young boys in Maine in the summer between Jr. High and High School and we were thrilled with Jon Bonjour signed on to do the artwork for the project. Then letterer Elisa St. John joined the team and elevated to an entirely new level. When finished, issue # 1 of BULLDOZER will be published Wicked Wolf Pub, the outfit run by our good friend Todd Jones. Will keep you posted.

And then we have the stand alone story, DEATH DERBY inspired by Japanese anime cartoon shows. This wild and wacky racing comic was illustrated and lettered by Brian Loner. He took our 9 pg script and turned it into a 14 pg knock-out strip that is just fantastic and fun. You’ll be seeing this in a future issue of RON FORTIER’S TALES OF THE MACABRE. 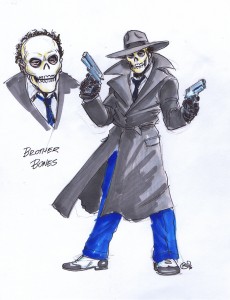 So at the start of the Flight Log we hinted at a major announcement in regards to Brother Bones, the Undead Avenger and here it is.

Filmmakers Bryan Patterson and Eugene Hawkins are teaming with accomplished comic book/New Pulp writer Ron Fortier to bring Fortier’s New Pulp character Brother Bones to life in a new web series. Patterson is producer of Another Girl (by Allison Burnett), War of the Zombies and Broken Freedom, and his production partner Eugene Hawkins served as producer of Daddy’s Little Girl and Totem and director of Two Scoops and The Sacrifice. Fortier has written for such prestigious names as the Terminator, the Green Hornet and the Incredible Hulk. Brother Bones is released by Fortier’s very own Airship 27 Productions. The pilot, to be directed by Hawkins, will be scripted by Jeff Provine, whose previous screenplay was The Woods. He also founded the Okie Comics Magazine, where he edits and contributed New Pulp titles such as “When Film Goes Missing” and “Thunderbird.” In addition to his writing, Provine is professor of English at OCCC and instructor at OU for their History of Comics seminar.

Needless to say we’re pretty excited about this. The gentlemen behind the project have already created a dedicated Facebook page – Brother Bones Web Series. Be sure to sign on to it to get updates as things move along. Also by the end of the weekend there will be a Brother Bones You-Tube Channel, be sure to check it out.  And that’s it for this week, Loyal Airmen, as ever, thanks for stopping by and we’ll see you here next week.