Hi Loyal Airmen, last week’s debut of the Wicked West Comic Expo created by our pal Todd Jones was a huge success. We will talk more about that later in the Log, but right now we want to talk about the comic project that has had the Air Chief wound for sound these past few months. 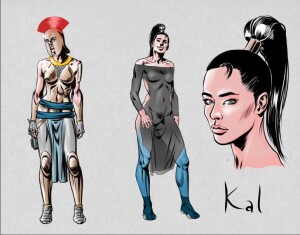 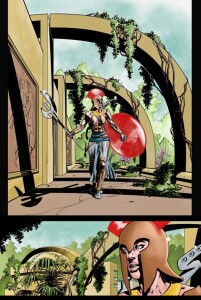 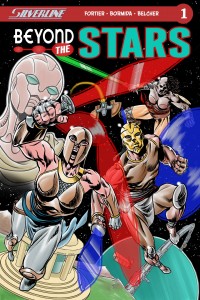 The for the past few months we’ve been ranting and raving about the new comic book project we were working on with Italian Artist Andrea Bormida and my pal, artist Mike Belcher on letters. Well the book is complete and on May 5th, less than a month away now, Silverline Comics will begin a Kickstarter Campaign to pay for the book. We’ve been told it is impossible for a small outfit like Silverline to get 1,000 backers for any new independent title such as BEYOND THE STARS. Here’s the rub, unless we do that, we won’t be able to pay Andrea regular industry rates and that will most likely end the project.  There will be no issue # 2. Whereas the Air Chief doesn’t believe in no-win situations. Nor do we believe it is impossible to reach that goal. But we are really going to need YOUR help, Loyal Airmen. We’ve already begun posting lots of great artwork from the series all over social media. But to get the word out efficiently, we need YOU to join us in this process. Please tell all your friends about this project and share these beautiful images. With your help, and the grace of God, the Air Chief is confident we can make this happen.

For those of you Loyal Airmen who follow this Log weekly, you are familiar with the character, Captain Jain Marlee, a space smuggler we created long ago and has appeared in a half dozen short 8 to 10 comic strip adventures. Well we’re happy to let you know she’ll soon be back in a brand new adventure called Ghost World. It is now being illustrated by California based artist Ariel Aguire and above are a few of his pages from the story. We love them and can’t wait to this one in print. 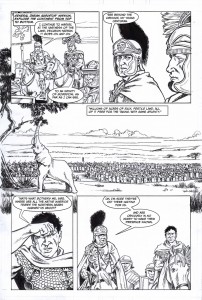 Meanwhile my pal Rob Davis continues to work on the first issue of the new Boston Bombers Volume Two with our lost Roman Legion traveling the vast savannas of Africa. Rob’s work always blows us away. 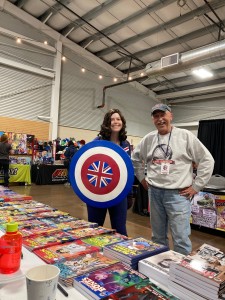 This past weekend saw the debut of the Wicked West Comic Expo in nearby Loveland, Colorado. The con was the work of one of our dearest friends, comic writer/publisher Todd Jones. Todd did a fantastic job putting on this two day show and the Air Chief and Valerie had so much. This being the first big con since the Covid days, it was so great to reconnect with old friends and meet lots of new ones. Thanks to everyone who stop by our tables to buy something. Note, it was also the first time the Air Chief had two tables at a show. No more having to stash away half our books under one single table because we didn’t have enough room to display on the top. Above is a picture of one of Todd’s many helpful volunteers decked out as Captain Peggy Carter with the Air Chief. We’d hoped to have more photos and several were snapped by a local professional photographer but we haven’t seen them. Once we do, you’ll see them here. Promise. And lastly, thanks Todd, you hit this one out of the ballpark.