Greetings Loyal Airmen, a while back the Air Chief talked about a new project we were working on with Florida based comic artist Cesar Feliciano to be called JIN & TONIK. The story is about two international assassins, one Chinese, Jin, and the other Russion, Tanya Tonikova. Early only Cesar did up a bunch of sketches of both characters and they were sensational. Still, he wanted to expand his styling so that series would end up being like nothing he’d ever done before. 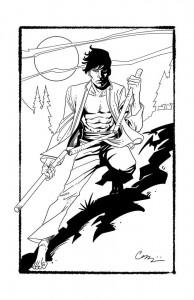 Above to the left is one of his early offerings. The one on the right is his most recent approach to the character of Sammy Jin. You can see how subtle Cesar is making the figure look more real, other than another comic hero interpretation. 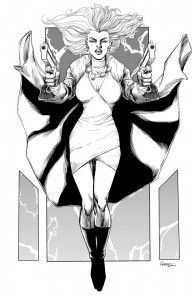 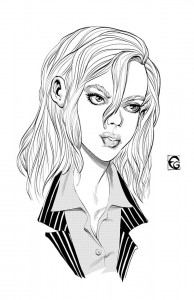 And here is the early Tanya Tonikova as compared to his latest piece done last week. We find it exciting to see how Cesar’s artwork evolves and matures. The sign of real talent. Honestly, all this simply wets our appetite for when he begins working on the actual pages  to chapter one. As ever, Loyal Airmen, we’ll keep you posted.

On the pulp front, Airship 27 Productions has two new titles this week. First we are thrilled to announce the release of writer Fred Adams Jr.’s second Sam Dunne mystery, “Blood is the New Black.” Dunne, a musician, is hired to write the score to a cheap slasher movie. While on location, the lead actress is murdered and Dunne finds himself once again playing detective. This is a terrific read, as Adams, who taught fiction writing for many years, is also a talented musician having played with many rock and roll bands. Thus he knows the world of Sam Dunne intimately. Artist Richard Jun provides the interior illustrations and Art Director Rob Davis provided that snazzy cover. “Blood is the New Black” is now available at Amazon in both paperback and on Kindle. 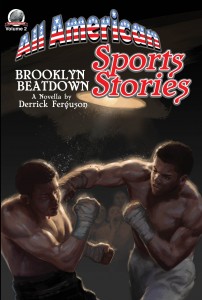 And then we have “All American Sports Stories Vol Two.” It kicks off with a boxing novella “Brooklyn Beatdown” by Pulp Factory Award winner Derrick Ferguson. Then we have a baseball tale by Dexter Fabi “Baseball in December” and finally the Air Chief himself offers up a college yarn called “The Kicker.” Rob Davis provided the interior illustrations and that beautiful painted cover above is by artist Adam Shaw. This is also now available at Amazon in paperback and on Kindle. As ever Loyal Airmen, we thank you for your continued support. We couldn’t do any of this without your.

And finally we close out this week’s Flight Log with the good news that our Black Bat – Domino Lady graphic novel collection is now out. And it is awesome with some really great art and an army of classic pulp heroes joining forces to battle evil. You can pick up a copy, if so inclined, from Moonstone Books on-line store.  If you like pulps and comics. we think you’ll enjoy it.  And there you have it for this week, Loyal Airmen.  Stay well and safe and we’ll see you all back here next Friday.