Greeting Loyal Airmen, well we seemed to have survived another great Windy City Pulp & Paper Convention.  Weather was a bit raining when Chief Engineer Rob Davis and the Air Chief arrived but that soon changed to nice sunny weather and the show was fantastic. So many of our colleagues were present and as ever we made tons of new friends. So without further ado, let’s check out some pix. 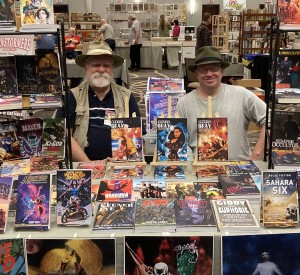 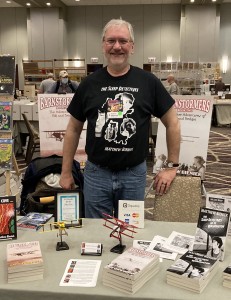 The central aisle in the hustler’s room is quickly becoming the New Pulp Aisle. Directly across from our Airship 27 tables were Tommy Hancock with Pro Se press and his pal/writer Aubrey. Next to them was writer Matthew Bieniek having a table for the second year in a row. 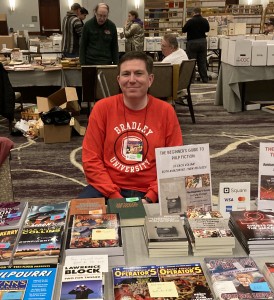 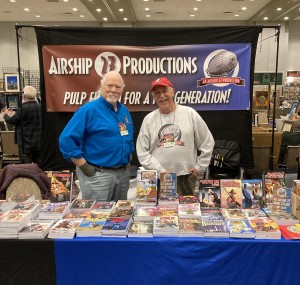 Jonathan Sweet writer/publisher was there with a big smile on his face and of course there’s Rob and the Air Chief and our stack of titles. 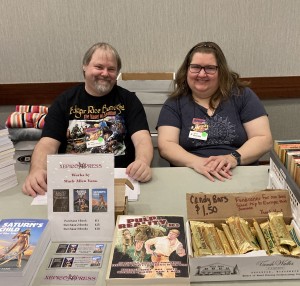 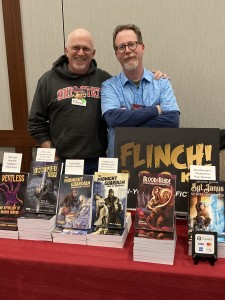 Pulp writer Mark Vander Zanden and his fiancee Robyn next to guys behind Flinch Books, Rich Bruening and Jim Beard. Both old pals, this being their first trip to Windy City. 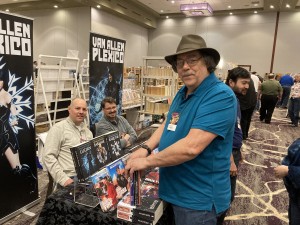 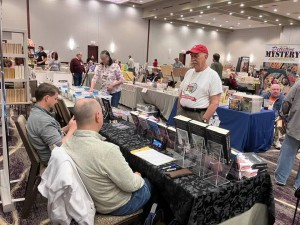 To the left of Airship 27 was White Rocket Book’s very own Van Plexico along with writer Andy Fix, and browse through their awesome books writer Gene Moyers. Even the Air Chief stopped by later in the day. 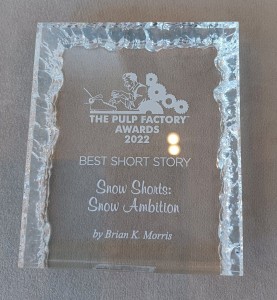 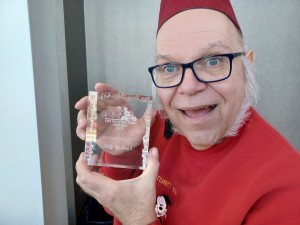 On Friday night, as ever, the Pulp Factory Awards were handed out and we were delighted to have winning short story writer Brian K. Morris on hand to accept the remaining four awards for those creators unable to attend. Brian was terrific and had the audience in stitches. That’s him with his own personal award. Here’s a list of all the winners. 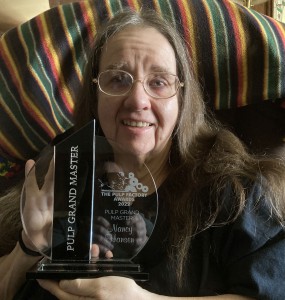 Along with these annual awards, the Pulp Factory Awards committee awarded Connecticut based writer Nancy Hansen their Grand Master Award. This is only the second time it has been presented. Unable to attend, a friend of Mrs. Hansen, writer Lee Houston Jr. video tape her receiving the award and you can find that video on You Tube here – (https://www.youtube.com/watch?v=9vAfSrMASCA)

A NEW SHORT STORY IS OUT 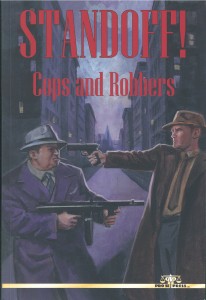 The Air Chief was also surprised while at the Con to discover our latest short story “The Last Trail – A Bass Reeves Story” had been published. It is part of the anthology “STANDOFF – Cops and Robbers” produced by Pro-Se press and edited by our pal, Tommy Hancock. The cover above is by the always amazing Adam Shaw. And as you’d expect, you can pick it up at Amazon right now. Had fun writing this one, Loyal Airmen.

BEYOND THE STARS KICKSTARTER UPDATE

On the same day the Air Chief flew off to Chicago for the con, the official Kickstarter Campaign for our new comic series, BEYOND THE STARS was launched. Within the first day, support was fantastic but then by the end of the week-end things had started to stall out and though we had passed the half-way point of the $5,000 money goal, we still have a ways to go yet. 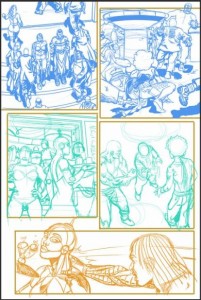 Meanwhile undaunted by any of this, BTS artist Andrea Bormida continued his beautiful work on issue number two. Above is the completed page # 4 without lettering. 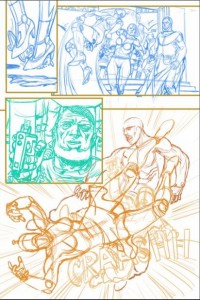 And here is the finished page # 5. As you can all see, his enthusiasm hasn’t let up at all. So please, if you haven’t signed on to support us, do so now. And if you simply can’t do so, then share our link with all your friends and family. It will help us so much. (https://www.kickstarter.com/projects/silverlinecomics/scifi1?fbclid=IwAR1YkNaGgmd2GAKdif_3SacsbzwEs7uSKfgWR0lB1YkcSfJnjUO-ktCJD2c)

And earlier this week artist Andrea Bormida and letterer Mike Belcher did a You Tube podcast promoting the project. You can find it here. (https://www.youtube.com/watch?v=kVJGTl35X6E) 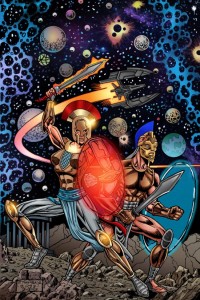 And finally here’s Steven Butler’s alternate cover to BTS # 1 as beautifully colored by Mickey Clausen. The Kickstarter Campaing only has ten days left.  Again, we can’t do this without you.