Greetings Loyal Airmen, when the Air Chief was growing up in the little town of Somersworth, N.H. he lived near many of his Fortier relatives. A street away my cousin Richard lived; we called him Dickie. He grew up, married a wonderful girl from Canada and they had two children, a girl and a boy. His son, named Richard Jr. grew using the name Ricky. A few weeks again, Ricky, our second cousin, reached out to us on Facebook. Ricky is married and he himself has two beautiful children; daughter Natalie and son Blake. Ricky informed us both of them loved to read. Natalie loves mysteries whereas Blake enjoys drawing and comics. 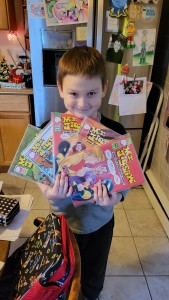 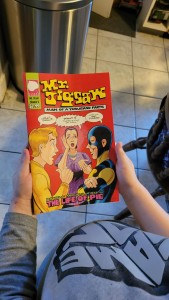 We wasted no time picking out five issues of our Mr. Jigsaw comic book and mailed them to Blake. Above are photos dad Ricky snapped upon Blake getting his comics. He reported Blake liked the cover to the time travel issue (see image above to the left) and started with that one first. By the end of the day he had read three of the five and enjoyed them all. We were delighted to hear that and are now giving some thought to what we can send his sister, Natalie. More on that later. 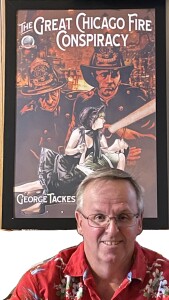 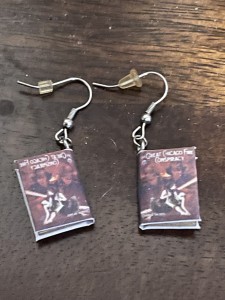 A couple of years ago we published writer George Tackes first ever novel, “The Great Chicago Fire Conspiracy.” Well this past Christmas, George had the wonderful idea of turning the cover to that book into earrings to give to both his wife and daughter. Now just how cool is that? Way to go, George! 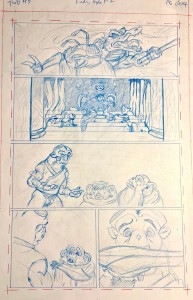 Artist Olivia DeGaine whips up pencils for another page to the forthcoming adventures of Raizee the Ram in our series The Wooden Blade. We so love her work in adapting our script our script. 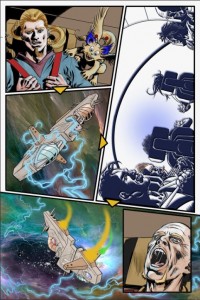 Artist Andrea Bormida delivers Pg # 18 of issue # 2 of our BEYOND THE STARS sci-fi. Adventure, with our heroes caught in the swirling chaos of a space nebula. Stay tuned. Lots more to come. Oh, yeah. 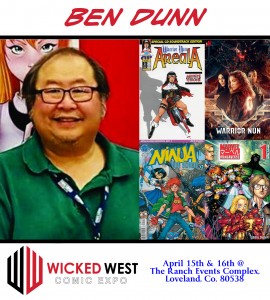 We’d been waiting for months to make this announcement, and yet somehow it got out weeks ago without us being aware? Okay, so time to correct. The big guest, as announced by con promoter Todd Jones, of this year’s Wicked West Comic Expo is none other than indy comics creator/publisher, Ben Dunn. The same Ben Dunn who created the Netflix series “Warrior Nun.” Ben and the Air chief worked ages ago on a Popeye comic, but this will be the very first time we get to meet in person. So welcome to Colorado, Ben!!  See you in April. 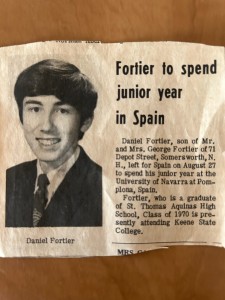 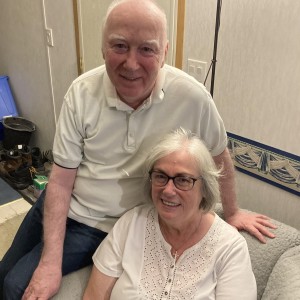 Finally, we end this week’s entry with bidding our younger brother Daniel Paul Fortier farewell. Paul, as he preferred to be known, passed away Wednesday morning after a two year battle with cancer. Paul was son number three, after yours truly and brother George. Our little brother. Then our sister Ann Marie came along and completed our loving family. Paul was smart, kind, vivacious. He had a pure love of life and lit up a room whenever he appeared. At the end, in a hospice facility in Vermont, David, his partner of thirty years was by his side. Above is a newspaper clipping printed when Paul was a student at Keene State College in New Hampshire. He so loved to travel. To the right is Paul and sister Annie. They, being the two youngest of our clan, were always close. We Fortiers are people of faith, we believe in God the Father, the Son and the Holy Spirit. Today, Paul is in heaven with our parents, getting basking in the pure love of his creator, where, with prayer, we will all join him one day. God bless you all.