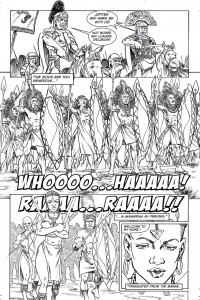 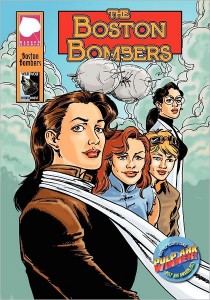 Artist Rob Davis just delivered Pg # 6 of Issue # 1 of this second volume…and as ever it is simply gorgeous. A friend over on Facebook, upon seeing it, asked where he could purchase the comic. We replied that we are still a long ways from wrapping up this issue #1. When we do, it will most likely be published via Rob’s own Redbud Studio at which time we’ll let everyone know it is available and how to order a copy. Meanwhile, do keep in mind, if you are at all interested in the project via the pages we’ve been posting, you really do need to read Volume One…for the story to make any sense. And that (as seen above to the right) is available from Amazon. Reading Volume Two cold doesn’t work. 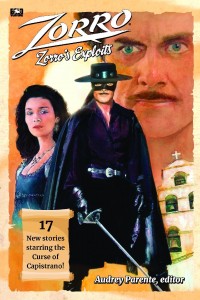 As we are sure many of your remember from a week’s ago, we announced we’d written a story for the new Zorro anthology from Bold Venture Press – “Zorro’s Exploits.” Ours in one of 17 stories in this great book. We’ll we are happy to announce the book has been published and is now available from Amazon in both paperback and hardback. We hope you’ll check it out. We were so thrilled to be able to write a story of this classic pulp hero. 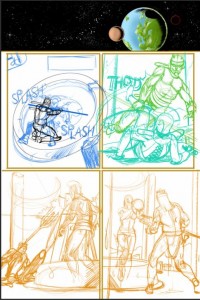 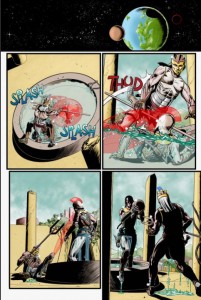 Above is artist Andrea Bormida’s completed Pg # 8 from the second issue of Beyond the Stars. First is the roughs and then final inks and colors. For all of you who helped support and make our Kickstarter Campaign a success, keep in mind comics (including issue # 1) will ship this month. 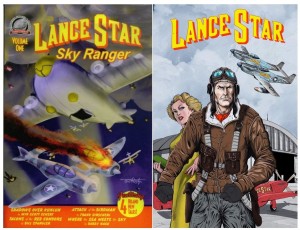 Only a few weeks ago we announced that Pulp Factory Award winning artist Clayton Murwin had signed on to do the illustrations and cover for writer Bobby Nash’s (himself a PF Award winner) first ever Lance Star Sky Ranger novel called “Cold Snap.” Not only has Clayton begun work on the interior pieces, he took a moment to do up a terrific new Lance Star piece. (Above left.) Though not the official cover, we loved it so much and had to share it with all of you. Stay tuned for more updates, and thanks Clayton. That piece would make a great print/poster. Hint – hint. Oh, and a reminder, there are already 4 Lance Star Sky Ranger anthologies still available at Amazon. Above Right is the cover to Vol one. 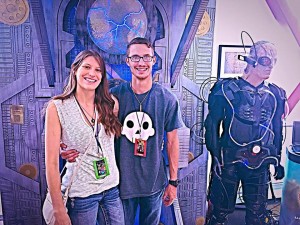 And as we said at the start of this entry, here is the best news ever!!! Cora our grand daughter and her boy friend of eight years, Calvin became engaged over the weekend. He proposed, after asking her father for his permission and gave Cora his late grandmother’s ring. God bless them. No concrete wedding plans yet. Will most likely be scheduled for some time in 2023. Valerie and the Air Chief, and all family members, are so happy for them.

And that’s a wrap for this week, Loyal Airmen. As ever thanks for stopping by and God bless.

WE HAVE A COLORIST!!