FRIENDS WE DON’T FORGET EVER

Greetings Loyal Airmen, recently the Air Chief found himself reading/editing a new title for Airship 27 Production that is part of a series started by an old friend no longer with us. It got us to thinking about them, their loved ones and our wanting to keep their creations alive. 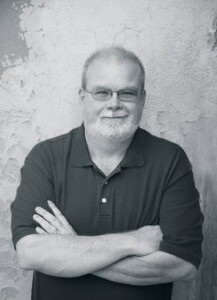 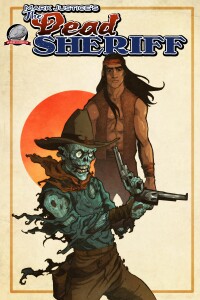 When the Air Chief and Art Director Rob Davis launched Airship 27 Production, one of the first people to send us stories was a morning radio show host from Flatwoods, Kentucky, Mark Justice. Mark had a wicked sense of human and loved all kinds of genre fiction. He also hosted his own highly successful podcast centered around horror fiction. We gladly accepted many of Mark’s shorts and the Air Chief was even a guest on his podcast discussing our horror graphic novel, “Daughter of Dracula.” Shortly before his unexpected passing several years ago, Mark had approached us about reprinting his first Dead Sheriff novel, “Zombie Damnation.” The book had first been published by a local printer and the rights had reverted back to Mark. He was never happy with that original edition as he wanted to give the book the old Airship 27 pulp touch, i.e. our standard design of colorful covers and interior illustrations. And he suggested that this was only the first in a proposed series. We were thrilled with doing a new edition and the deal was struck. Then tragedy struck and Mark was gone. It was a loss many of us felt deeply. Months later, much to my surprise, we were contacted by Mark’s wife, Norma Kay Justice. She wanted to know if we were still willing to do that new edition. Wow. We quickly replied YES…and soon Airship 27 had released the first Dead Sheriff by Mark Justice. That’s Norma Kay above with her copy. 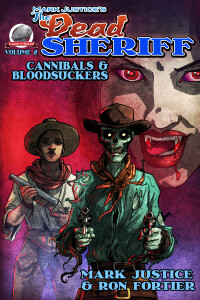 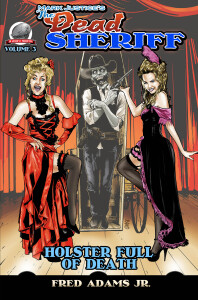 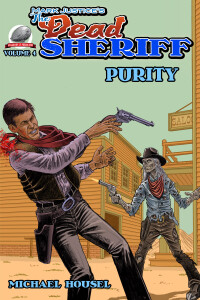 Shortly after the release of “Zombie Damnation,” Norma Kay informed us that Mark had begun a second Dead Sheriff novel and would we like to see it. Again, we replied eagerly YES. The Air Chief will never forget reading Mark’s unfinished second tale and loving every single page of it. Enough so that we realized we very much wanted to complete it; both for Mark and Norma Kay. Thus months later we put out book # 2 “Cannibals & Bloodsuckers.” It was really well received and it was obvious the Dead Sheriff’s audience was growing. Rob and the Air Chief knew we had to keep the ball rolling and this time we went and recruited one of the finest writers in New Pulp today, Mr. Fred Adams, Jr and the end result was book # 3, “Holster Full of Death.” There was no stopping us now. Last year we released book # 4, “Purity” by another talented writer, Michael Housel. And now we are on the verge of putting together volume # 5 in the Dead Sheriff series, “A Cold and Lonesome Grave” by California based writer, Phillip Pan. Trust us, Loyal Airmen, this is by far the Dead Sheriff’s weirdest adventure to date. The joy and satisfaction of keeping this series going is special to us at Airship 27. It’s about remembering old friends and doing our little bit to keep their memories alive. 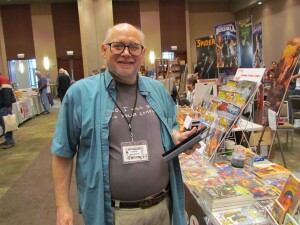 Last year we lost two other amazing pulp enthusiast and writers. The first was our dear friend, Mark Halegua, seen above to left at the Airship 27 table at one of the many conventions we shared together. Before his passing, Mark had talked about writing a novel with his colleague Nancy Hansen. He shared with her ideas about a different kind of pulpish super-hero. Though he never got to write it, after his death, Nancy and fellow writer Lee Houston Jr. took on that task and later this year we’ll be bringing you their wonderful book, “Mark Halegua’s The Blue Light.” Another sad loss was another one of our best writers, Greg Hatcher. Greg had done quite a few Sherlock Holmes tales for us and in his last efforts created a new pulp character called Dr. Fixit. Greg had completed three Dr. Fixit yarns, the third to be published in the next volume of “Mystery Men (& Women)” and begun a fourth when he was called home to heaven. It is our plan to print that last completed Dr. Fixit and then recruit an Airship 27 pro writer to complete the unfinished adventure. That done, we will then collect all four into a very special one-shot title, “Dr. Fixit” by Greg Hatcher. Stay tuned Loyal Airmen. As you can see, we here at Airship 27 don’t forget those wonderful souls that touched our lives and made this world a better place. Amen. 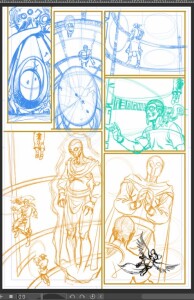 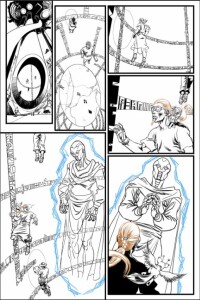 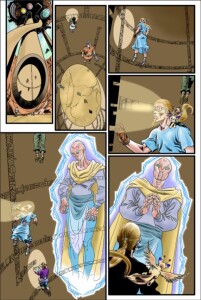 Artist Andrea Bormida continues to deliver outstanding work as each new page he delivers is beautiful. Above is the full realization of Pg # 6 from rough pencils to inks and completed with colors. Prof. Yonel Travane encounters the ghost of an ancient ER-keedy while on an archeological dig. 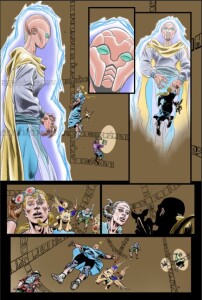 The ghost relays a cryptic message to Travane, which in turn sends him off to report the encounter to his home world of Haven and the All Mother. Things are heating up, Loyal Airmen. 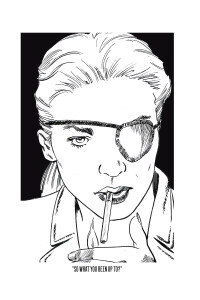 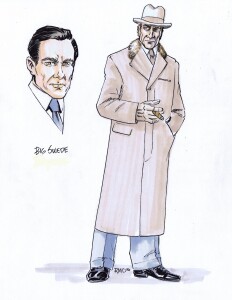 Finally, on the book front, Rob Davis is moving rapidly through our novel, “CAPE NOIRE – A Beest & Beauty Tale.” His latest completed illustration is of a new character added to our cast; Beatrice Ann McCauley. Better known through out the city of crime as Betty One-Eye, top enforcer for gang boss Big Swede Jorgenson. It’s said she has a razor blade snugged into the tip of her pony-tail. Ouch. As you can see, things never slow down here at Hangar 27.

And that’s it for this week, Loyal Airmen. Thanks as always for stopping by and we’ll see you all back here next Friday.

WE REVIEW BOOKS TOO