HUNT FOR A COLORIST

Greetings Loyal Airmen. Last week we gave you a peek in the pre-production of what we hope will result in the publication of our 130 Pg BROTHER BONES graphic novel. 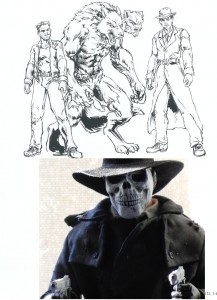 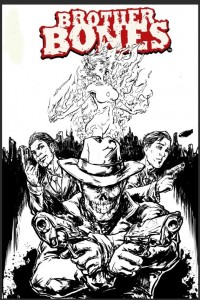 As our yet-to-be-named artist on the project continues to do up character sketches. See above. It is time we put out a call for a colorist to join our team. Note, there will be no up-front monies as this project will be funded entirely by some kind of on-line program ala Kickstarter. So our artist, and whoever joins signs on as colorist will only be paid IF the campaign is a success. And of course much of that will depend on the talent involved…and promotion. Not being all that savvy about such funding programs, the Air Chief expects the final money goal will be up there. Paying people to do a 130 pg comic book isn’t going to be cheap, by any stretch of the imagination. To be successful, we’ll need ALL you Loyal Airmen not only to help us by contributing, but to spread the word throughout the internet. But relax, we’re still months away. For now, we need that colorist. 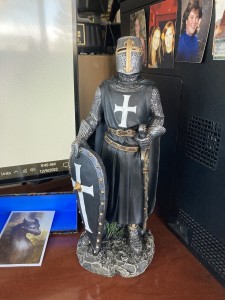 Look what mail delivered a few days ago. Our first Christmas gift. A wonderfully detailed Templar Knight figure from my dear friends, Michael & Donna Housel. Michael’s is one of our writers at Airshcip 27. There was a second surprise in the box and we’ll share that later after some special adjusting. 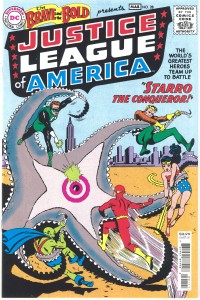 The Air Chief turned 13 the Nov of 1960. As a comic book fan, we were in seventh heaven as that year had seen the birth of Marvel Comics and the start of what would be known as the Silver Age of Comics. The amazing Stan Lee and Jack Kirby had given us the Fantastic Four, and then Steve Ditko joined Lee on Spiderman and just like that, we fans were being bombarded by amazingly wonderful new titles. Of course, the good people at National Comics (now known as DC Comics) weren’t oblivious to the sudden burst of sales competition they were getting. For the past few decades after World War II, they had pretty much owned the superhero market, though those titles had fallen into woefully childish tales not fit for anyone by a five year old. Thus, with Marvel whipping up Iron-Man, Thor, Ant-Man like popcorn month after month. Thus as 1960 started slipping away into the future, the big guns at National began offering up “new” versions of their own classic Golden Age titles and almost overnight we had a new Flash, a new Green Lantern, Atom and Hawkman. All were brilliant and this 13 old fan just couldn’t get enough. Eventually Lee assembled the Avengers and hot on their heels National began posting adds for Brave & Bold # 28 to be out in the Spring of 1961. We had always loved team books and the cover of that comic excited us to no end. And so when that month arrived, we jumped on our bike and peddled all over our little town of Somersworth, N.H. in search of that comic. Remember, there were no comic shops in those “olden” days and distribution was random from drugstores to Mom & Pop grocery markets. The same title was guaranteed to appear at any one location monthly. Thus the hunt was on and after a desperate few weeks, we finally found the comic in one of those neighbor markets. The euphoria of actually getting our hands on is one of the fondest memories we have. Tie to the fact that we’d be going to high school that Fall and you can see why the memory is so vivid. We didn’t even wait to get home to read the darn thing, but rather sat down on the cement steps of that little store and read it there and then. Ah, what a rush.

That was 63 years ago. A lifetime indeed. Now imagine the Air Chief’s wonderful shock when looking through new titles at our local comic shop here Fort Collins, CO. and we see that exact comic. And we do mean exact. Picking it up and flipping through it, lo and behold we immediately realized DC had printed an exact facsimile reprint of Brave and the Bold # 28….to include not only all the great story pages, but even the old ads that had been featured in the original issue. Obviously there was no way the Air Chief was leaving that shot without it. Getting home and rereading it again, after all those years was simply wonderful. Of course back then we only paid .10 cents for it. This reprint was $4. Ha. My how the times have changed. 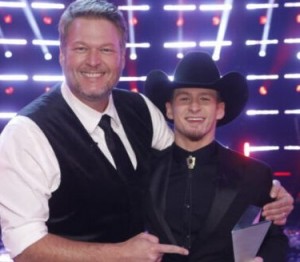 Ever since moving to Colorado, it was inevitable that Valerie and the Air Chief would become huge fans of Country Western Music. Don’t get us started on how awful today’s modern music scene is. Thank God for good old fashion C & M, with great songs that tell stories by some of the finest singers in the land. Thus it was which much pleasure we watched Georgia native, 22 yr old Bryce Leatherwood become the winner of The Voice talent show this past week. There’s a photo of him with his coach, veteran C & M super star, Blake Shelton. Week after week this kid knock our socks off with his melt-butter-in-your-mouth voice and knowing he won by the viewers vote, tells us America still knows good music when it hears it. 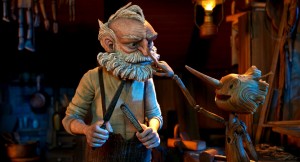 Finally a film recommendation to found on Netflix.  Guillermo del Toro’s own version of the classic children’s book Pinocchio. Be warned, it’s not the cute little Disney cartoon version, and the setting if Facist Italy during the second World War. But it remains a haunting story of love and loss brilliant envisioned by del Toro and the people at the Jim Henson studios. This is stop-motion-animation at its finest and the voice cast is terrific. Don’t miss it.

And that’s it for this week, Loyal Airmen. Again, thanks for stopping by and we’ll see you back here next Friday morning. Counting down to Christmas.