Greetings Loyal Airmen, this week we kick of our Flight Log with something completely different.

A while back writer Lou Mougin sent us a manuscript containing several stories all of which take place withing inner-world of computers. Think something like Disney’s Tron movies. wherein the characters are actual programs. Whereas Lou’s stories were all mysteries and his main character is a private eye investigation them. Well we loved the stories and accepted the manuscript for publication at which time began a year long hunt for the right artist to do the nine interior illustrations. We knew going in this would be no easy task. And then one day we saw artwork on line by an artist named Fer Calvi. 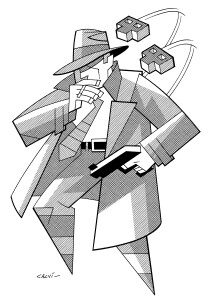 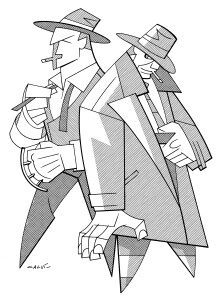 Fer has a very unique approach to styling his art, some of is realistic, while other times very, very cartoony. So we contacted him and explained the concept of Joe Computer Private Eye. Fer liked the idea a great deal and signed on, saying he would work on developing a particular style directly for this book. Well, after a few months of trial and error, last evening he sent us the two images you see above. We think they are amazing and perfect for this particular project. And more then ever we are thrilled to get it into production at long last. Stay tuned, Loyal Airmen, as ever we’ll keep you posted. 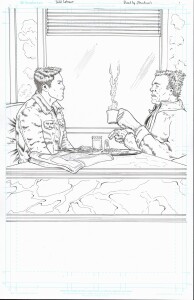 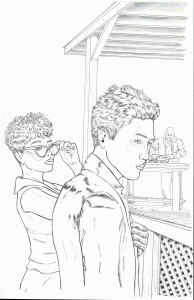 Last year Airship 27 published KILLING SHADOWS, the first Jon Shadows adventure writer Teel James Glenn. Artist Tedd Lehman provided the interior illustrations. Well we’re happy to report the second book in the series, DEADLY SHADOWS is now in production and Tedd has joined us on this project as well having just turned in his first two illustrations. He’s a terrific artist and Art Director will provide the cover when the book is finished. 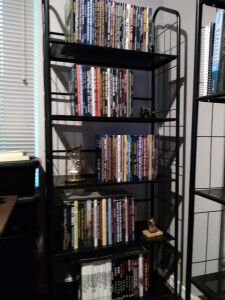 Our good friend and fellow writer Mark Vander Zanden recently moved and brought all his New Pulp books with him. Above is his new book case, the top three shelves are ALL Airship 27 Production titles. Now that’s a Loyal Airmen. Thanks so much for your continued support, Mark.

And that’s a wrap for this week’s Flight Log, Loyal Airmen. As Ever thanks for stopping by and we’ll see you all here next Friday.