Greeting Loyal Airmen, in the past the Air Chief has done quite a few post on the process by which certain covers were made for our Airship 27 Production titles. And we love doing it, showing all of you the beginnings from an idea to realization. So this time, we’re going to take you step by step in how we and Art Director/Artist Rob Davis put together the cover to our latest volume of SHERLOCK HOLMES – CONSULTING DETECTIVE # 16. 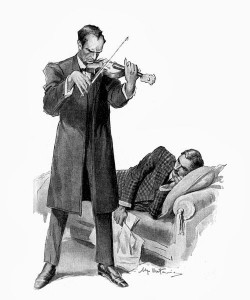 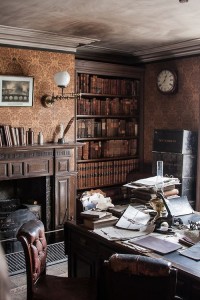 Over the years, the Air Chief has digitally collected dozens of images of the great detective and keep them in a file on our PC. One such is the pen and ink illustration above that has always been one of our favorites. It was drawn by Ugo Matania for an Italian translation of Arthur Conan Doyle’s Holmes story “The Sign of the Four. Upon reflection, we often wondered what it would look like with the actual background of their apartment at 221 B Baker Street filled in.  As it were it is only Holmes playing his violin and Watson, paper in hand, reclining on a sofa. So we brought the idea to Rob and asked if he thought it was doable. 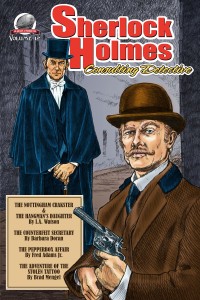 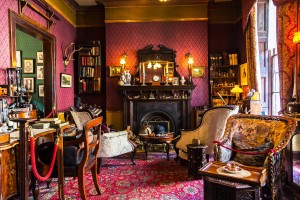 Now as most of you Loyal Airmen know, Rob is a super Holmes fan and has done all our interior illustrations for our titles to include the cover for Volume 12. (Above to left.) Rob loved the whole idea and searching online discovered that a recreation of Holmes’ digs at 221 B Baker St. had been made in London at that address with a store on the first floor and the museum like room upstairs. He downloaded several pictures of it. (Above at right.) So now Rob was going use that photo and the sketch and merge them into a single drawing. 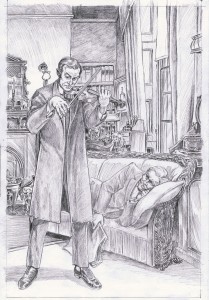 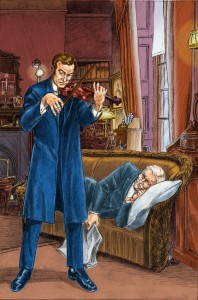 Once he was satisfied with his pencil drawing, it was time to add the colors. At this point we had a nearly completed cover for SHERLOCK HOLMES – CONSULTING DETECTIVE Vol. 16. All that remained was to add the logo and writer credits. Thus from Senor to Matania to Rob and now to you, Loyal Airmen.

And there’s the final cover to our 223rd title from Airship 27 Production. Now available in paperback and on Kindle from Amazon. We think it came out looking fantastic and hope you Loyal Airmen will agree. It features a long novel by Lee Houston Jr, a regular from I.A. Watson and two short-shorts by Greg Hatcher. Each is a wonderful mystery gem.

And from one pair of famous classic British characters, we have a sneak-peek of a new Airship 27 title coming your way – “Alice in Neverland,” by R.A. Jones. In this the heroine from “Alice in Wonderland” finds herself in Neverland and meeting Peter Pan. They then set off on an amazing adventure. Our dear pal Gary Kato provided the wonderful interior illustrations such as the one above. The cover, by the amazing Ted Hammond will blow you all away. Look for this in a few more weeks, Loyal Airmen.

Finally, those of you who follow our Airship 27 Podcast, episode # 68 is now up at You Tube. Check it out if you want to see the Air Chief and Chief Engineer Rob Davis wax eloquent about all things pulp and offer up two really, really bad jokes every show.

FROM SCI-FI CLASSIC TO LEGEND OF DESERT QUEEN