ME & THE BIG GORILLA 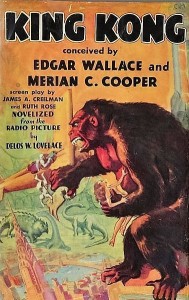 Greetings Loyal Airmen, in this week’s Flight Log we want to talk a wee bit about our favorite movie of all time, the original 1933 KING KONG from RKO. The film was a huge hit when it had a duel premier on both coast of the country, one at RKO Radio Music Hall in New York and the other at the Grauman’s Chinese Theater in Los Angeles. It was the first movie ever to earn a million dollars. As was done in those days, films were released, shown and then put back in the vaults for a few years before they would be re-released to a hopefully new audiences. That’s what happened in 1955 and our father decided to take his son, 9 yr old Ronnie, to see it. The film imprinted itself on our psyche so much, we would never forget it or that experience of viewing for the very first time. The story of a gigantic wild beast torn from his home to be displayed and humiliated by a world of sophisticated cruelty bothered us greatly so that at the film’s powerful climax, as the bi-planes swoop out of the sky to attack the Mighty Kong making his last stand on the top of the Empire State Building, little Ronnie was actually rooting for the Big Gorilla and it broke our hearts when he was finally shot down. 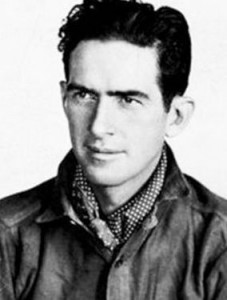 This incredible story was the created by two World War One veterans, Major Merian C. Cooper, a highly decorated Annapolis graduate and aviation ace and his pal, film photographer Ernest B. Shoedstack.  Cooper had been brought to RKO because the company was failing and it was his job to save it. After trashing several dozen scripts he found pathetic, he went to the studio’s special effects guru with his idea about a giant gorilla. 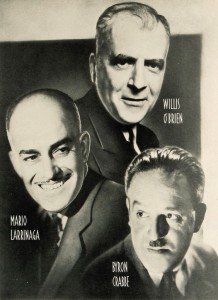 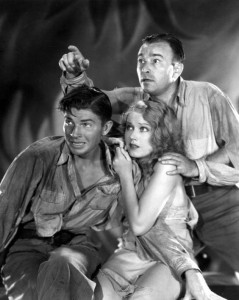 That guru was the amazing Willis O’Brien and his team of Mario Larrinaga and Byron Crabbe. These were the pioneers who invented stop-motion animation, the magic by which inanimate options move on film. Cooper had seen their work on the previous silent classic, “The Lost World” and knew O’Brien was his Merlin to work his big monkey comes to cinematic. Once a script was set, and Shoedstack was on board to direct, they hired Robert Armstrong, Bruce Cabot and the beautiful Faye Ray as the three characters whose lives are forever changed by their encounter with King Kong.

And though we’ve seen the movie hundreds of times (no exaggeration there) the film still to this day moves us emotionally. Enough so that over the years we’ve continue to buy various versions of the novelized script. In fact it is still one of our biggest dreams to one day write a graphic novel detailing the making of this classic movie and reveal the events and characters that made it possible. 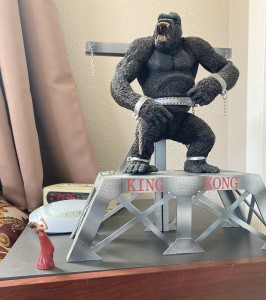 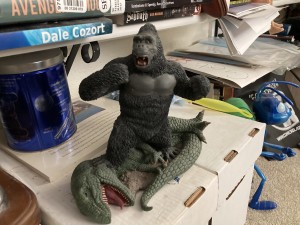 Meanwhile whenever new Kong toys appear on the market, we have to have them, relishing the memory of that 9 year old boy mesmerized by movie magic. Above our two of our biggest pieces, the one on the right was a gift from a friend, Michael Housel. 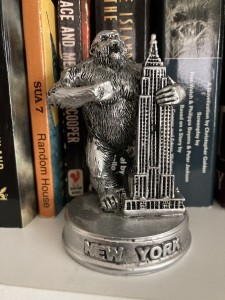 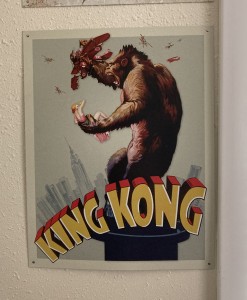 Above left is a tiny Kong figure sent to us from Emily Janke as she picked it up during her trip to the Empire State building and was so kind to gift it to us. To the right is our tin-poster displayed on the Air Chief’s office wall. 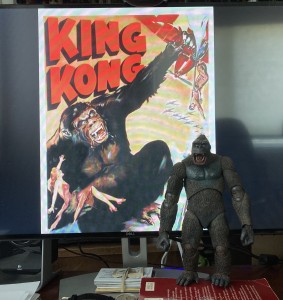 And finally our latest toy acquisition picked up earlier this week at Target. Seems someone got the rights to the 1933 figure and has produce three different variations. This one was the one we chose to add to our Kong collection. King Kong will always remain our favorite movie of all times. 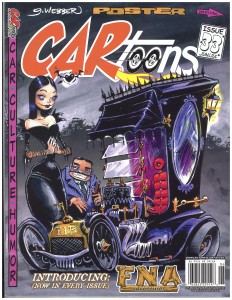 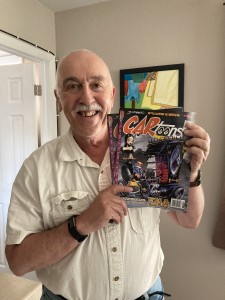 And now for something totally different. Way back in the Fall of 2019, artist Jeff Slemons asked if we’d be interested in writing a few short strips centered around automobiles. Jeff had been working as an illustrator for CARtoons magazine for a while and his editor was asking him for more short strips. The Air Chief had never done anything like this and that was all the incentive we needed. In the following weeks we wrote two five pages scripts and sent them off to Jeff. Before he could draw single panel, 2020 and Covid was upon us and lots of things got put aside, including these scripts. Then about a month ago, out of the blue, Jeff sends along a PDF containing the finished strip for “Yellow Whizzer.” Only now it is merely called “Whizzer” and is featured in issue # 33 of CARtoons currently on newsstands everywhere. We found out copy at Barnes and Nobles. When reporting this great news, Jeff confessed to having embellished my skinny script and we had absolutely no problems with that. It is still the story we cooked up, only now with much more characterization and dialog and we love it. It appears on pg # 20, with Jeff’s credit. Don’t let my name being absent concern you. We did this for fun, and that’s exactly what we received in the end. Can’t ask for anything more. Who knows, hopefully Jeff will soon get around to do the second script we sent him. We sure hope so.

And that’s it for this go round Loyal Airmen. As ever thanks for stopping by and we’ll see you here next week.