Greetings Loyal Airmen and thanks for stopping by. This week we want to put the spotlight on another creative partner, artist Cesar Feliciano. 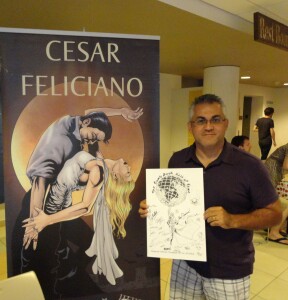 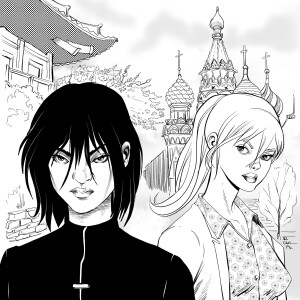 Formerly from Massachusetts, Cesar now hangs in hat in sunny Florida. As you may know, Cesar was the artist who came up with the idea for the multi-graphic novel saga of JIN & TONIK; the story of two deadly assassins, one Chinese and the other Russian, masters at their death-dealing professions, who in a truly strange way both experience a similar spiritual epiphany that ultimately changes the course of their lives and leads them to salvation. 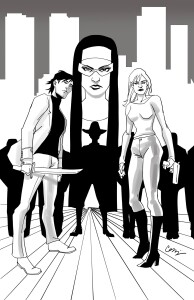 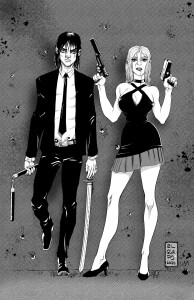 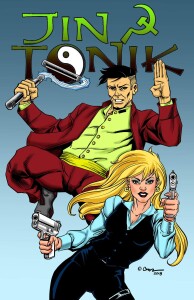 Intrigued by the concept, the Air Chief wasted no time in signing on to script this tale. This was well over a year ago and we spent almost two months writing up 85 pgs of script. All the while Cesar was busy finishing up another graphic novel project called CHANGO. Then last year and Covid struck and put lots of things on hold. Once this year rolled around, all of us started playing catch up and for Cesar that was doing up tons of great sketches for our characters, Sammy Jin and Darya Tonikova, both alone and together as is evidence by the beautiful pieces above. 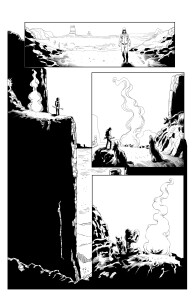 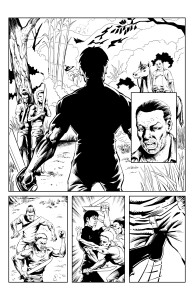 Then a short time ago Cesar began in earnest bringing my script to life. Above are samples from the first 16 pages, starting at left with Pg # 1 that introduces Navajo Shaman Eddie Nightsky, then we have Pg # 8 with introduces Sammy Jin and finally Pg # 16 which he turned in a few days ago finally debuting Darya Tonikova’s arrival on the stage. This is going to be a truly amazing adventure and Cesar and the Air Chief hope, after we wrangle a publisher, you Loyal Airmen will join us on the journey.

On other news, the first Brother Bones Grave Tales hardbacks from Amazon arrived this week. Overall we’re are happy with the printing itself. The cover reproduction, both front and back is excellent, the interior quality is also top-notch and the books are easy to open and read…with pages complete and far enough from center. Our only criticism is Amazon did not protect them when packaging. They were simply put in a small box without any stuffing material, bubble-wrap or such. Thus two of the three seen above had the top cover corners slightly mashed. Which has us scratching our heads. Whenever we order paperback books, they come totally wrapped in protective paper or bubble-wrap. So why not with these more expensive items? Go figure mega-companies? We certainly cannot. 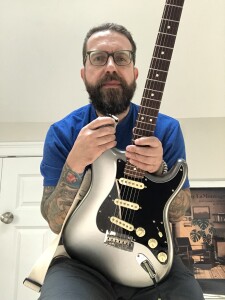 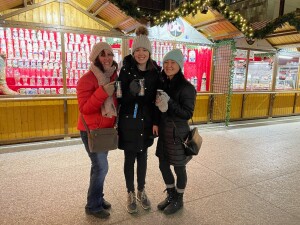 Now for something truly important, updates on our wonderful children. Between us, Valerie and the Air Chief have five, three boys and two girls. They are the greatest loves of our lives, them, and of course our six amazing grand kids. What with Thanksgiving last week, we heard from all of them and that included some new pictures. Wahoo. Son Kevin above to left, manages a very successful supermarket in Massachusetts, while at the same time continuing his love of music and guitar. He was recently taking night lessons to play classical guitar. Just as writing feeds our soul, for son Kevin it has always been music and we so envy him that talent. To upper right, the young lady at far left is daughter Heather with two of her friends braving a rather chilly night in Chicago where they life. Heather is a social butterfly and has a close knit group of friends in the Windy City all of who love theater. She recently saw a new production of the Sound of Music and said it was great. Her birthday is Aug 27th, for those of you Loyal Airmen who always wondered why that number when creating our Airship 27 Production company…and now you know. It’s the Air Chief’s lucky number for sure. 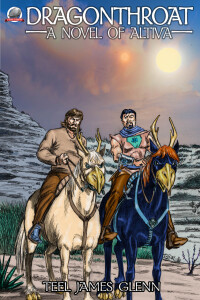 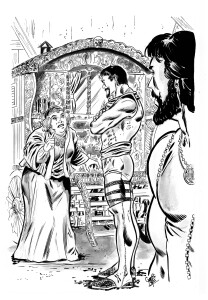 Airship 27 Production is thrilled to announce our latest New Pulp novel release, “Dragonthroat” by award winning writer Teel James Glenn. This is an other-world fantasy adventure much like the works of Edgar Rice Burroughs. Great action, exciting new worlds in a great story. Art Director Rob Davis provided the cover (above left) and artist Chris Nye the black and white interior illustrations (above right). The book is up at Amazon now in both paperback and on Kindle. As ever we thank you Loyal Airmen for your continued support.

And that’s it for this week, Loyal Airmen. Thanks again and see you back here next Friday.