Greetings Loyal Airmen, after a rather quiet past week, things are once again revving up. Not only with an old project made new, but the Air Chief is wound for sound in announcing the release of the newest Brother Bones book. 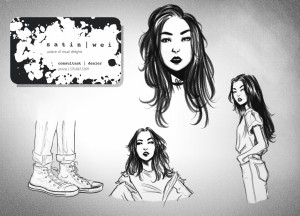 But first some truly exciting news about a project we created well over twenty years ago. “Satin’s Ways” was a character concept we introduced in a 48 pg comic script that was never published. It featured a Chinese jewel thief called Satin Wei, born and brought up in Hong Kong and now living in Seattle, Washington as an art boutique owner. Quite a few other artists over the years did sketches and even full pages of the character but nobody was willing to stick with it as we didn’t have a publisher. Thus the revolving door of artists kept on spinning. A month ago, we were contacted by writer/editor/publisher Roland Mann of Silverline Comics.  Apparently Roland had a very talented young lady wanting to work for him but no project ready to hand her. Having wanted us to work with Silverline, he came knocking on our door and after about ten minutes of thinking, we recalled “Satin’s Ways” still sitting there in our files collecting dust. We described it to Roland, he loved the concept and then went to sound out Ms Jenna Deriggi. Jenna is currently a student at the famous Joe Kubert School of Graphic Art in New Jersey. She loved the concepts, Roland hooked us up on Facebook and over the weekend, based solely on my script, Jenna drew the above the sketches of our hero.  We LOVE them and honestly believe, twenty years later, our girl is about to make her comic debut. Oh, and did we mention the comic will be in fully color? Stay tuned, Loyal Airmen, things are about to get fun. 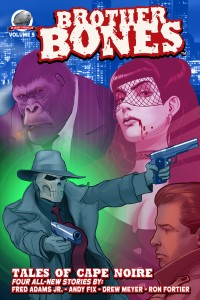 And now this week’s big news. After a rather lengthy delay, BROTHER BONES – Tales of Cape Noire is now available at Amazon in both paperback and on Kindle. This is the latest in the Bones series (#5) and contains four stories by yours truly and three other talented pulp pen pushers. Fred Adams Jr. kicks it all off with his Harry Beest story. This is followed by a Sister Blood tale by writer Andy Fix. Then comes Drew Meyer’s story featuring detective Lt. Dan Rains. Each of these writers produced amazing stories and then left it up to the Air Chief to tie all the various plot elements together at the end. Which is what we did our best to accomplish in a story called “Dark Real Estate.” Keep in mind, the events in the Brother Bones saga do keep affecting future stories, characters come and go. Some die and are replaced by others. Art Director Rob Davis provided 10 wonderful interior illustrations for the volume and that gorgeous cover you see above is by Michael Stribling. We’re very excited about this book, especially now that the new live action Brother Bones Wed-Series is in pre-production. We hope you’ll check it out and as ever, thanks Loyal Airmen for your continued support.

And that’s it for this week, Loyal Airmen. Thanks for stopping by and we’ll see you next week.

DRACULA IN THE CAN