Greeting Loyal Airmen, well Thanksgiving is now in the rearview mirror and we imagine all of you are gearing up for Christmas.  Last Sunday, the Air Chief finally hooked up with his writing students from his third class at the Front Range Community College done back at the end of 2018 to hand them their published comic book. 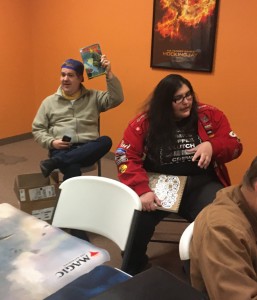 Five of the seven were on hand. At upper left we have Terry Crowley and Zane Degaine, while to the right holding up his copy is a very happy Evan Hundhausen. To his right is artist Shana Moura who is studying animation. 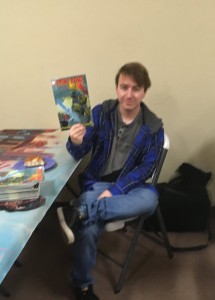 At upper left, and a bit blurry (sorry about that) is Justin Green and to right Gabriella Saenz, a 14 year old creative wonder. She was only 13 when she took our class. So much amazing talent. 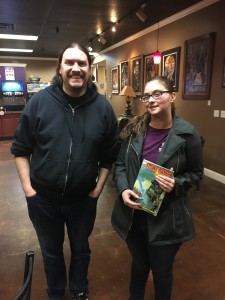 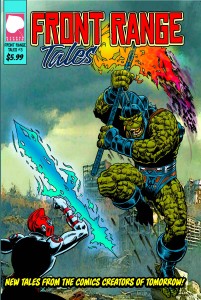 And the last two creators, David Drasheff and Aryn Benavides. Should any of you Loyal Airmen like to pick up a copy of FRONT RANGE TALES # 3, they are available at Amazon.com – Now on to getting issue # 4 started. 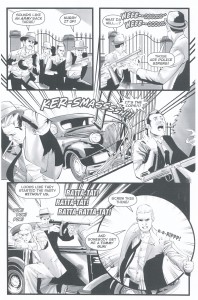 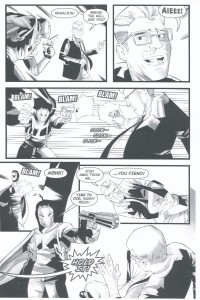 Finally, two years ago Joe Gentile of Moonstone Books asked the Air Chief to write a four issue mini-series featuring two classic pulp heroes; the Black Bat & Domino Lady.  We called the project DANGER COAST TO COAST referring to the fact that the Black Bat operated in New York and and Domino Lady in Los Angeles. After the scripts were written, several different artists worked on them. And by several we do mean several. It was a weird thing to say the least and thus created all kinds of unforeseen delays in getting the projects completed. In the meanwhile the Air Chief working on wrapping up a previous 3 issue mini for Moonstone called GUNS OF THE BLACK BAT. This was completed and released. Now, we are happy to report DANGER COAST TO COAST, thanks to letterer Patrick Williams is almost finished…at long last. Whereas due to the overlong time in getting it done, Gentile has opted to publish one giant pulp comic wherein it will include (reprint) all three issues of GUNS and then premier all four issues of DANGER. It boggles the mind as to just how many pages this one volume will contain. Above are two sample pages from issue # 2 of GUNS never seen before. Our best guess is this giant comic will debut early in 2020 and we couldn’t be any happier. It’s a fast paced, action adventure and the art throughout is gorgeous. Stay tuned loyal airmen, as ever, we’ll keep you posted.

And there you have this week’s Flight Log, Loyal Airmen. As ever thanks for stopping by and we’ll be back next week.

INTO THE HOLIDAY SEASON