Greetings Loyal Airmen, as most of you know, one of the hardest challenges facing us at Airship 27 Productions is finding new illustrators for our new pulp novels and anthologies. As it turns out, we have several top-notch cover artists who work with us on a regular basis, but it is recruiting artists to do the black and white interior illos that is really difficult. 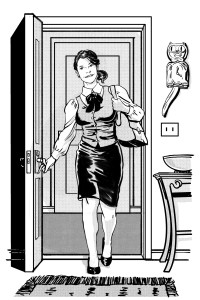 Which is why we were stunned these past few weeks by finding four new super talented artists willing to join the Airship 27 team and work with us. We showcased one of these, Jeff Cram, a few weeks ago and now we want to introduce you to another talented fellow, Jason Wren. Jason has taken on JENNA COYNE MYSTERIES, a new title by writer Robert Ricci and the gorgeous piece above is one of his illos for that project. We absolutely love it and are thrilled to having this project now in production thanks to Jason. Stay tuned, Loyal Airmen, in the weeks to come we’ll be giving you more such peeks our new Artist Airmen. 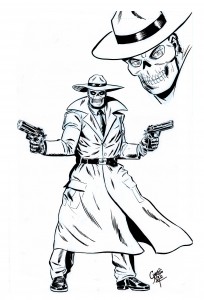 Another artist who has recently begun working with us at Airship 27 is Chris Nye. His work on THE WRAITH anthology was stellar and we hit it off immediately. Chris let us know he’d been wanting to get back into comics and the Air Chief mentioned the 130 pg Brother Bones graphic novel script we had in our files collecting dust. As some of you may recall, another artist had agreed to take this on, only to quite a few months later for personal reasons. And once again we were left high draw. Whereas this time things are going to happen, as Chris is committed to completing the project. Once he begins, he will be penciling and inking the pages and Rob Studio will letter and ink and ultimately publish at Amazon via his Redbud Studio imprint. The script is derived from the aborted screenplay that was done several years ago, based on the two stories, “The Bone Brothers” & “Shield & Fang.” It will be the first time ever that Bone’s origin is told in comic form. What with the work entailed, we hoped to have the book out some time in 2021. Stay tuned.

Finally it is with a heavy heart that had to say good-bye to our mother yesterday, May 12. Gabrielle Marie Fortier, Mom, passed away in the afternoon suddenly. She was 95 and her passing was peaceful and pain free. Her heart just stopped. Obviously we knew this day would come, but that knowledge in no way can ever prepare you when it actually happens. She was a wonderful mother and we owe her so much. Now she’s in that better place, reunited at long last with our Dad. Rest in peace, Mom, no one deserves that rest more than you. Give Dad a big hug from me. I will miss you always till the day I see you again.