Greetings Loyal Airmen, we hope all of you are enjoying Spring, that you’ve gotten your vaccine shots and looking forward to all of us once again getting back to familiar, fun events with family and friends. 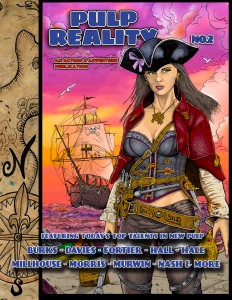 Last year publisher Storm Gate Press won the Pulp Factory Award for their first issue of Pulp Reality. Now they have just released the second issue and above is the cover, featuring a truly beautiful illustration by artist Clayton Murwin. If you’ll look closely at the list of creators, you’ll see the Air Chief’s name smack dab in the middle. When publisher Charles Millhouse put out a request for submissions, we remembered our little weird western story, “The Wind Kid,” which we had written a few years ago and made available only on Kindle.  (Yes, it is still there Loyal Airmen.)  Whereas it has never been taken to print, we queried Charles, telling him of its history and inquiring if he could use it for this issue. He replied affirmatively and even went and got permission from artist Rob Davis to use the wonderful illustration that covers the Kindle version. Aside from the Air Chief, the list of contributors to this volume is really awesome and we hope you’ll check it out. It is available right now at Amazon. As ever thanks for your support.

Last week we had the fun of  introducing to you to Chef Pierre, the Pulp Factory Master of the Kitchens. This week, Airship 27’s own Chief Engineer Rob Davis wanted to present to you his number assistant at Hangar 27. 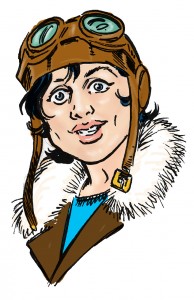 A 16 year old student at the Crest Valley Vocational Academy.  Father is a NASA Engineer her mother an Emergency Room nurse.  Gloria is youngest of three girls; older sisters Ruth and Grace are both away from home in college. Fascinated with all things aviation, she was introduced to Chief Engineer Rob Davis when he was a guest speaker at the school. Impressed by her uncanny skills and inventive abilities to make machines from spare parts, Rob offered her an Apprentice Scholarship and she now works as his assistant at the Airship 27 Hangar when not in classes at school and on the weekend. Aside from building things, she has a fondness for Cheery Cokes, stray animals and an obsession with airships. It’s rare to see her cute face without several blotches of grease on it. Nothing makes her happier than fixing something broken. Rob has become her mentor and she jokingly calls him “Pops” teasing him about his age. 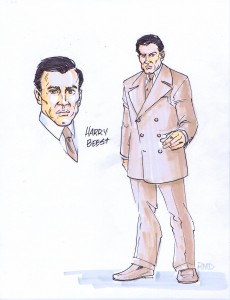 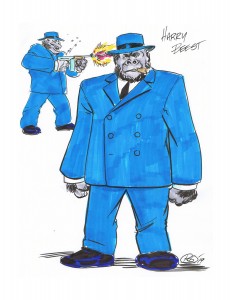 Finally, after wrapping up that 108 pg Black Bat graphic novel, the Air Chief turned his attention to his next prose writing project. From the start of our Brother Bones series, one of the most radical and fan favorite characters in that world has always been Harry Beest, the mobster who crossed his boss, Topper Wyld, and for it suffered a horrid face. His brain was removed from his body and put in that of a Silver Back Gorilla. Thus Beest became a true Beast. Well all of that was hastily stated in a just a few paragraph before diving full into the story with him. What we never did was give the complete story of why and how this fate befell Harry. That is the core plot of the prequel novel we are now writing and hope to have completed by the start of July. Tentative title will be – CAPE NOIRE : A Beest & Beauty Tale. We think our Brother Bones fans are going to enjoy this filling out of the back story, not only of Harry, but other familiar players in the series. Stay tune and wish us luck.

That’s it for this week Loyal Airmen, thanks as always for stopping by and we’ll see you back her next week.