Greeting Loyal Airmen, we thought this week we’d give you a little art peek at what’s coming down the line from Airship 27 Productions.  We are in the last stages of putting together our third Mark Justice’s Dead Sheriff weird western adventure. 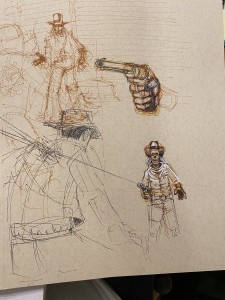 Writer Michael Housel turned in a truly great novel called “PURITY” and whereas our own Rob Davis did the nine black and white interior illustrations, we assigned the cover to North Carolina artist Michael Youngblood. His last work for us was a gorgeous Sherlock Holmes cover. So for this one, we asked Michael to give us our zombie hero in a classic western shoot-out. A few days ago he sent in the above sketches. The one on the left is his personal take on the Dead Sheriff, which is just awesome. Then the roughs on the right are his preliminary sketches to get a feel for the composition that will eventually evolved into the finished, colored cover. We’d say Mr. Youngblood is totally on the right track. 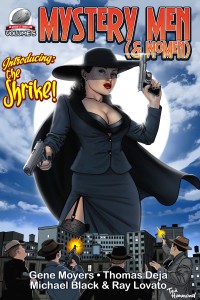 Now for something totally out of the blue. A few years back we released “Mystery Men ( & Women) Vol 5″ which cover featured The Shrike, a sexy new pulp hero created by writer Gene Moyers. Imagine the Air Chief surprise today, when surfing Facebook, we came across the sketch at upper right done by another one of our stalwart artist, Mr. Graham Hill. We immediately downloaded it to compare it with the Ted Hammond cover of The Shrike.  Now, we don’t know if Graham ever saw that cover before, but this woman he drew could be her twin. Wild stuff, Loyal Airmen.

In the past few years, the Air Chief has noticed a gradual shift in the style of pulps we are now being offered by our amazing stable of writers. Consider the recent “The Road Twice Taken” by R.A. Jones, something totally different than we had ever done before. The thing is the more unique the manuscripts, the more excited we become in working with them. Now political spy thrillers have been a staple of American fiction ever since the late Tom Clancy came on the scene and since that time many new, gifted writers have jumped into the same genre pool. Imagine the Air Chief’s surprise and delight when writer Wayne Carey sent us one such modern day thriller. The book is called “Executive Gambit” and repeating what we just posted, it is unlike any other book we’ve ever done here at Airship 27 Productions. Above is a sneak-peek at the back cover. Art Director Rob Davis has provided the interior illustrations and the most fitting cover imaginable. At present the title is in the last stages of production. Stay tuned, we think all you spy fans are going to love this one.

And that’s our Flight Log for this week, Loyal Airmen. As ever thanks for stopping by and we’ll see you here next Friday.