Greetings Loyal Airmen, whereas this past week Rob and the Air Chief recorded our 75th episode of the Airship 27 Podcast, we thought it might be fun to detail the creation of another Airship 27 crew member, the lovely Radio Rita.

After Rob and the Air Chief had launched the once a month podcast show, it became the Air Chief’s job to notify folks via Facebook and the internet when we would be doing another episode and at the same time ask folks to send in questions if they had any. Wanting to have fun with these notices, one month we began the post by saying we’d just received a call from Hangar 27 (the place where our beloved Airship 27 is kept when not in the air) and in doing so we envisioned this beautiful woman in charge there as our chief radio operator…and we simply called her Radio Rita. Knowing visuals are a key element in getting people’s attention, the Air Chief scoured the internet in searching of an image in which a beautiful woman was talking on a radio set-up. Lo and behold we found the above old school pin-up and it was perfect. Thus Radio Rita was. Best guess, the artist was the legendary Gil Elvgren. 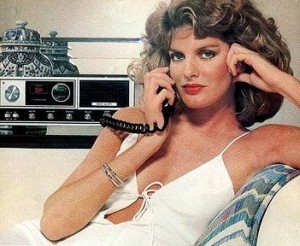 After using the pin-up for several months, we thought it might find another similar image and change things up a bit, not wanting our Loyal Airmen to simply get used to seeing the pin-up piece. So back to the surfing the web until we landed on this one above of an actual young model on a wireless set. Well alright, now we had a “real” Radio Rita and our FB pals loved her. Some believe she’s a young Renee Russo, and they might be right. Anyway from that point onward we would swap back and forth between the pin-up Rita and the live Rita. 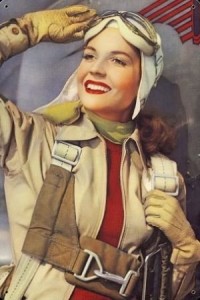 After a while the Air Chief began thinking it would be awesome if Rob would see his way into drawing a brand new old school type pin-up of our gal. The Air Chief thought it might be fun to see Radio Rita riding through the skies on a mini-airship. Rob was hesitant at first, not having done this kind of cheesecake and admitted be uncomfortable about the idea. So we let it drop. Then two weeks ago the Air Chief found the above pix of a lovely female aviatrix thought, “So Rita is our radio gal, but whose to say she isn’t a pilot as well?” So this new version was added to our files of the lovely Rita. And lo and behold something in it clearly sparked Rob’s wonderful imagination because less that a week letter he sat down and delivered…. 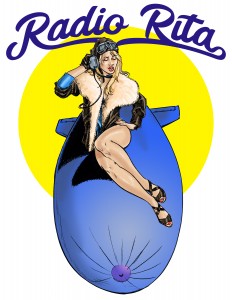 Loyal Airmen we give you Airship 27’s own Radio Rita, Queen of the Airwaves. Rob outdid himself and the Air Chief loves this new pin-up of our gal. In fact we’re giving some thought to maybe doing a t-shirt with this picture. What do you think? 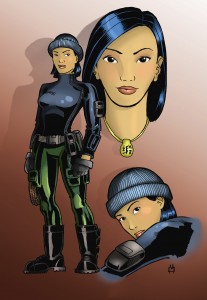 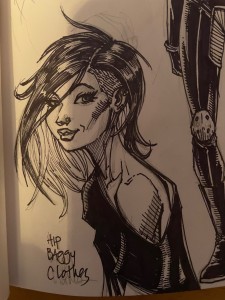 Moving right along. Another character the Air Chief created long-long ago, was Chinese cat-burglar, Satin Wei for a comic book series to be called SATIN’S WAYS.  Sadly the original artist who worked on the project, G. Martinez was unable to do more thank sketches and an 8 pg strip, which invariably was published in several black and white comic anthologies.  (His is Satin at upper left.) Then a few other artist took a go at the strip (ala the version in upper center) but they too moved on. Finally, after all these years, we’ve partnered with artist Richard Jun (upper right) and will be doing a SATIN’S WAYS comic for SILVERLINE COMICS hopefully by years end. To that end we turned to our pal Rob Davis to whip up a brand new logo for us and he delivered in style.

Looks like our lovely little thief is at long last going to make her comics debut in 2021. All fingers crossed.  And that’s our Flight Log for this week, Loyal Airmen. As ever, thanks so much for dropping by. Next week the Air Chief and Valerie will be in New England on vacation. But we’ll see if we can post a few things for you before we leave.

BACK IN NEW ENGLAND