Greetings Loyal Airmen, if you’ve been following this page for a while, you are already familiar with the Chinese cat-burglar we created years ago named Satin Wei. She was to be start of her own comic series to be titles SATIN’S WAYS.  And now, that first 48 pg adventure will be going into production for Roland Mann’s Silverline Comics with artist Richard Jun handling the art chores. 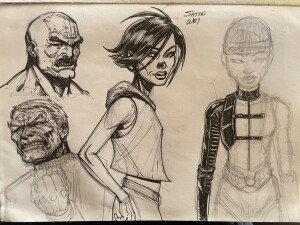 In the past we’d displayed some of Richard’s early sketches of Satin and the supporting cast. Well before he could even begin work on page one, Roland came up with the idea of doing a Silverline Christmas Comic Special and asked all of us if we’d do a 6 pg Christmas themed story featuring our character. Well Richard was willing to give it a go. 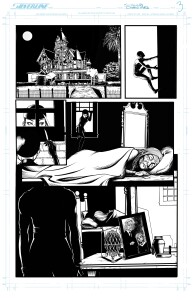 So then it was up to the Air Chief to come up with an appropriate story to make it all work. And happily we did giving Richard plenty of time to visualize and draw the six pages. Which he is now finishing and above is one of these. Once done, our good pal, artist Mike Belcher, will do the lettering. The strips will be colored and then go on to be a part of the Christmas Comic.

Meanwhile Richard is now turning his attention to the 48 pg story which Silverline plans to start promoting in October via a Kickstarter campaign. Above is the new logo for the project created by our own Rob Davis. 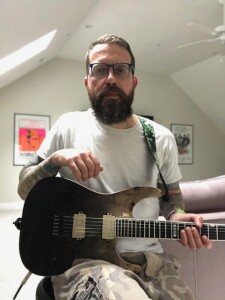 Finally on a fun personal note, our son Kevin and his wife Melanie are on vacation and visited Cape Cod. While there they stopped at a restaurant on the beach for authentic New England fried clam. He then sent us the pictures above. The Air Chief’s mouth was drooling. We don’t have any beaches here in Northern Colorado.  Ha. Take Loyal Airmen and we’ll see you back here next week.