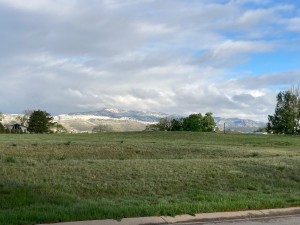 Greetings Loyal Airmen, as the Air Chief begins this log entry, it is Sat morning May 21st and yesterday we had snow descend on the Rocky Mountain State. This morning, the view of the white covered foothills behind our home in Fort Collins is truly beautiful. Still, let’s hope Mother Nature has finally said THE END to this cold stuff. Three days ago it was 86 degrees here. Please, let’s get back to that again. 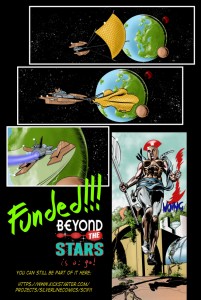 Those of you who follow this Flight Log know last we reached our Kickstarter Goal for our new comic BEYOND THE STARS # 1 being published by Silverline Comics. It was so amazing to see just how love and support we received for this project and on behalf of the entire BTS team, yours truly and artists Andrea Bormida and Mike Belcher, THANK YOU from the bottom of our hearts and God bless you all. As planned, published comics will beginning shipping to people in July. No worries, we’ll totally keep you all posted. 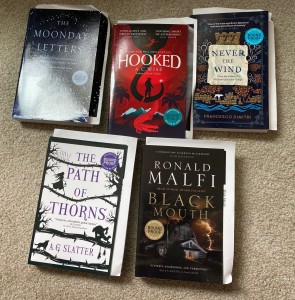 As many of your Loyal Airmen already know, we write an internet review column. Look up at top of this page and find the link to Pulp Fiction Reviews.  Been doing it for almost twenty years now. So obviously we get lots…and lots of books from publishers big and small. Imagine our surprise when a box showed up in the mail last week with five ARCs. That stands for Advance Reading Copy, which generally means it has been mailed out before it was proof-read to reviewers in hopes of getting early review responses. These five were courtesy of the British publisher Titan Books and although it is impossible for us to review every single book we get (not enough hours in a day..Loyal Airmen) in looking at these, for sure two will be popping up in my blog, possibly even three. Stay tuned, and please, do stop by my Pulp Fiction Review blog. You may find a treasure or two there. 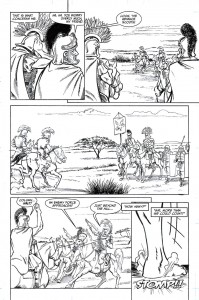 Partner and amigo, Rob Davis wrapped up Pg 4 of The Boston Bombers Vol 2 the other day and send it along. We love Rob’s artwork and are thrilled to see this project coming along. Likewise – 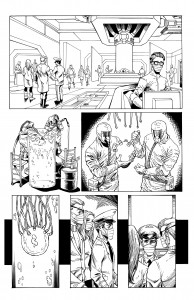 Above is Pg # 33 of issue # 1 of this modern day action thriller with art by the gifted Cesar Feliciano. Ever memory serves us correctly, Cesar has only three more pages to wrap up this premier issue. Then we will be discussing publishing options…and hopefully looking for a colorist to join our team.

Just over a year ago we published a sci-fi adventure novel by Wayne Carey entitles “El’Aris” which was to be the first in a years starting freight captain Tony Michaels and his alien co-pilot, Jiin of Tz-en. See cover above to left. Now Carey’s second in the series, called “Yokai” is in the final stages of production and this one features interior illustrations by the very popular cartoonist and creator of Megaton, Don Simpson. That’s one above at right. Happily, Ted Hammond, who did the cover to “El’Aris” is returning to do the cover on this new book. 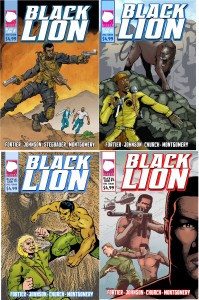 Finally over the past four to five years, the Air Chief and artist Kevin Johnson have been publishing the adventures of Jamal Lyon, an ex-Navy Seal whose code name is Black Lion. We’ve finished the story with book # 4 and are now in the process of collecting them all in one volume which will be published via Amazon. Soon as it is available there, we’ll give you the link. Thanks ever to all you Loyal Airmen who have supported the series.

And that’s it for this week, Loyal Airmen. As ever, thanks for stopping and we’ll see you back here next week.