Greeting Loyal Airmen, and welcome to this week’s Flight Log.  As most of you are obviously aware there is a live Brother Bones web-series in production and producer Bryan Patterson has been assembling quite an impressive production team of industry talent, from casting directors to a top-notch camera guy. With all this hoopla, it is obvious we’re capturing the attention of lots of people across web. One happened to be a long time fan of ours who we had never met before. His name is Jesse Baer. 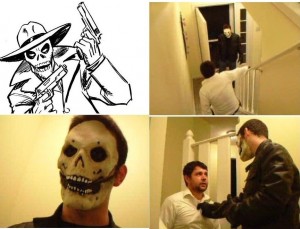 Apparently Jesse tripped over my work while still in middle school. He became an instant comics fan and then later really enjoyed the appearance of Brother Bones from Airship 27.  Enough so that by the time Jesse was in college, he talked several of his pals into doing a short Brother Bones film. Sadly they never went beyond filming one scene one evening and that was it. But all of them kept pictures and when he saw Bryan’s news regarding the new Web-Series, Jesse sent along the pictures. Bryan then shared them with us and we reached to this super-fan.  Jesse Baer is a great guy, married, has a beautiful daughter and works in a hospital kitchen as a chief. He studied film-making in college and still wants to pursue that dream one day. Meanwhile he’s written a comic series called “Burlap” and it looks to be a nifty crime series. As soon as we get copies, we’ll tell you more about. Thing is getting to meet Jesse because of this connection has been a joy for us. We’ve said all along, we have the best fans in the world and Jesse is really one of the tops.

A few weeks ago we informed you of the passing away of one dear friend, fantasy writer Charles Saunders. Well, having no surviving family or relatives, Charles was laid to rest in an unmarked grave in Dartmouth, Nova Scotia where he lived. Now friends have begun a GoFund Me page to raise $15,000 to purchase a beautiful stone for his final resting place to do honor to this wonderful man. If you would like to help us in this, below is the link to that GoFund Me page. Simply cut it out and paste it to your search engine…and thank you from the bottom of my heart. 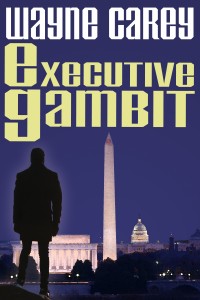 We are happy to announce the release of our latest Airship 27 title, EXECUTIVE GAMBIT by writer Wayne Carey. This is unlike our previous pulp adventures in that it is a modern day, edge of your seat political much like a Tom Clancy or Brad Thor novel. Art Director Rob Davis provided all interior illustrations and that terrific cover seen above. Book is now available at Amazon in paperback and on Kindle. As ever thanks for your support, Loyal Airmen.

And there you have this week’s Flight Log Loyal Airmen, as ever, thanks for stopping by and we’ll see you here next Friday morning.