Greetings Loyal Airmen. Nancy Hansen is one of the finest writers we know and a dear friend. So it is with much joy we kick off this week’s Flight Log announcing her latest Airship 27 book.

“The Silver Pentacle” is the first in a new series set in the distant future after the Earth has been ravaged by nuclear wars. What remains among humanity have gathered into various tribes trying to survive in this devastated world. Then along come super beings from another dimension bringing with them an eternal struggle between good and evil. This tale is a wonderful mix of both science fiction and fantasy as only Nancy can do. And we are also thrilled to have artist Guy Davis on board doing both the interior illustrations and that beautiful cover above here. Guy is a fellow Coloradoan and a good friend. This is his first work for Airship 27 Production and he has already signed on to be a part of the second book in the series. All in all another terrific title we hope you’ll check at Amazon. It’s there in both paperback and on Kindle. As ever, thanks so much for your continued support. 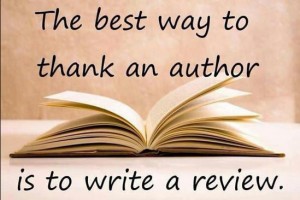 Aside from writing, editing and publishing, many of your Loyal Airmen know the Air Chief also writes a review blog called Pulp Fiction Reviews. We’ve been doing this over twenty years and in that time have written hundreds of book review, most of them connected in some way pulp literature. But also in that time we’ve managed to write reviews of non-fiction titles and let those slip in there. Recently the urge to read more non-fiction has prompted us to consider creating a second Google platform blog dedicated solely to non-fiction titles. And as it will be the cousin to Pulp Fiction Reviews, we’re going to label it Pulp Fact Reviews. We hope to launch in the coming week. If that happens we’ll post the link here next week.  Wish us luck. 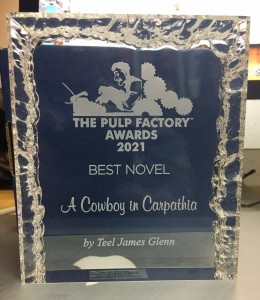 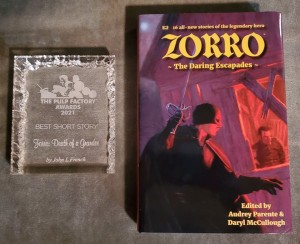 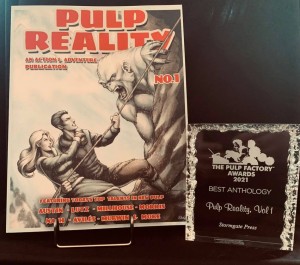 Finally this year’s winners of the Pulp Factory Awards have started receiving their awards in the mail over the past week. Three were kind enough to snap pictures and share them with the rest of the New Pulp community. The top close up pix belongs writer Teel James Glenn who won for Best Novel. Then we have John French’s for his Best Short Story and finally Publisher Charles Millhouse posted his for Best Anthology. Only two missing were our artists amigos; Dan Aviles who won Best Cover and Ed Catto who won Best Interior Illustrations. Hopefully these two talented gentlemen will be getting their awards soon. And once again, a heart felt congratulations to all our winners.

And that’s our Flight Log for this week, Loyal Airmen. As ever thanks for stopping by and we’ll see you back here next week.