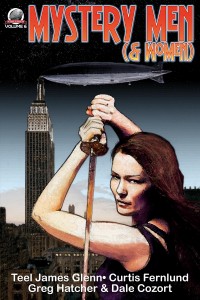 Greeting Loyal Airmen, we’re delighted to kick off this week’s Flight Log announcing the release of two new pulp titles. First up is “Mystery Men ( & Women) Vol 6 – This being our showcase series wherein Airship 27 pulp writers get to create brand new pulp heroes. In this one we have three such while the fourth tale returns a hero who debut in a previous volumes. Stories are by Teel James Glenn, Curtis Fernlund, Greg Hatcher and Dale Cozort and they are fantastic. Our own Art Director Rob Davis provided all the interior illustrations plus that nifty cover seen above that features martial artist Kiri. 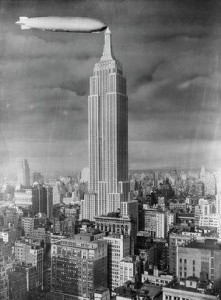 While on the subject of that particular new book, we thought you’d all enjoy a little bit about how it came about. The Air Chief, while surfing the web one evening found this nifty picture of a supposed docking of an airship with the Empire State Building. Those of you who know your history will be aware that while being constructed, the idea was that the pinnacle of the building would becoming an actual airship docking station from which passengers could board and exit those beautiful lighter-than-air crafts. Sadly, once completed, engineers realized the winds at that height made a stationary docking way too dangerous and near impossible and it was never attempted. Though fanciful artists and movie makers in the years to come would imagine it…like the image above. Whereas there is an actual such docking in the story by Curtis Fernlund, we sent this image to artist Rob Davis, who then flipped it to merge artistically with his drawing of the main character, martial artist Kiri. And voila, another great Airship 27 cover.

And then our second title is DAN FOWLER G-Man Vol 3 with stories by Whit Howland, Gene Moyers, Aaron Powers and Fred Adams Jr. Kevin Paul Shaw Broden provides the interior illustrations and Christ Rawding this up that snazzy cover above. As always both books are now available at Amazon in paperback and soon will be on Kindle. We thank all you Loyal Airmen for your continued support of our publishing efforts. We couldn’t do this without you.

Finally our latest AIRSHIP 27 PODCAST # 66 is up on You Tube. Simply cut and paste the link below.

As you can see, we’ been busy this week. Thanks ever for stopping by and we’ll catch up again next Friday.