WE HAVE A COLORIST!!

Greetings Loyal Airmen, lots of great news to share with all of you this week, so let’s get to it. 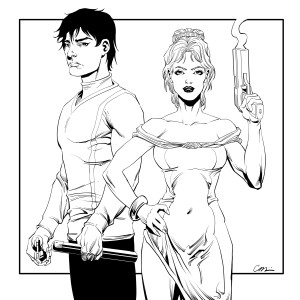 With issue # 1 of JIN & TONIK reaching completion by artist Cesar Feliciano, a few weeks ago the Air Chief began a hunt to find a top notch comic colorist to join our creative team and turn what had started out to be a black and white project into one that would be done in full color. Cesar’s pages were all but demanding color, they were so beautiful. And yet this quest seemed harder than we’d imagined and we kept hitting dead ends. It was as if there was no one out there willing to take a chance on our spy thriller. Then, out of the blue, our good friend, fellow writer Todd Jones asked if he could reprint the Gargoyle story we’d written for artist Dario Carrasco in his latest addition of his black and white anthology title, Wicked Awesome Tales # 13.

Both the Air Chief and Dario agreed and Todd went ahead with his plans. At the same time he got to use Dario’s old color cover. Upon seeing that cover, the Air Chief recalled it had been colored by Matt Webb; one of the best colorist in comics. Matt has been coloring comics for more than twenty-five years, and has worked for Marvel, DC, Dark Horse, and just about every publisher in the first half of the monthly Diamond Comics catalog, Previews. Influenced by greats like Jack Kirby and Jim Starlin, Matt’s colors have graced hundreds and hundreds of issues since he began working in the field. A great fan of classic monster films and comics, he often works with artist Neil Vokes, and has recently been providing colors for the very cool retro publisher Atomic Comics.

So we took a chance, messaged Matt via Facebook and asked if he might be willing to sign on to join the JIN & TONIK team…and much to our delight, he said yes. Above are two samples of his first work on our characters, Sammy Jin and Darya Tonikova from early pin-ups Cesar had done long ago and recently retouched. To say were thrilled to have Matt aboard would be an understatement. His brilliant colors are so going to elevated Cesar’s magnificent artwork. Stay tuned, Loyal Airmen, things are heating up fast on this one. 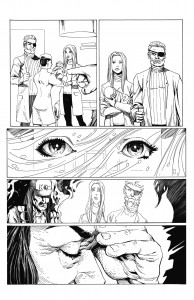 And to give proof to that last statement, Cesar this week turned Pg # 38.  He’s only one page left and issue # 1 is complete artwise. Now it’s up to Matt to do his magic and then we get it all lettered up. This is going to be one great comic when finished.

One of the joys of writing the adventures of the “new” Green Hornet and Kato was that artist Jeff Butler and the Air Chief got to invent the characters of Paul Reid and Mishi Kato. The idea of a female Kato had first been suggested to me by another comic artist, Steve Erwin. Originally we wrote our proposal for the new Hornet with Steve on board as our partner. By the time Now Comics took the idea and sold it to the then Licensor, Steve had started working for DC comic and was unable to do GH. So we tagged Jeff Butler who we knew was a huge GH fan and the rest, as they say, was history. Imagine our surprise last week when we open our e-mail one day to find a sketch of these characters by our pal, artist Mike Belcher. See above here. Mike not only did a fantastic drawing of Paul & Mishi, when posting it to Facebook pages, he wrote a intro detailing his love of the series from when he was a teenager. In looking at the piece, the we were once again reminded of a crazy notion we’ve been kicking around for the past several years; that of writing a prose novel bringing back these two beloved characters. Re-uniting them, if you well, and picking up where the Now series ended so abruptly. We even spoke with Moonstone Managing Editor Joe Gentile about the idea and back then he’d expressed an interest. What do you think, Loyal Airmen, should we being back Paul & Mishi…or not? Let us know what you think. And Mike, thanks a million. 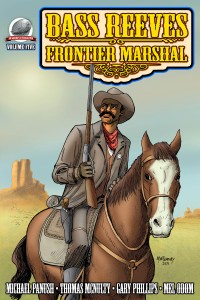 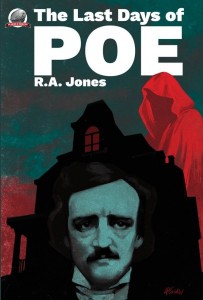 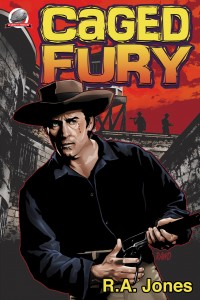 Things have been super busy at Hangar 27 as we’ve released three new titles in the past five days. Last Friday saw the release of our 5th volume “Bass Reeves – Frontier Marshal” with stories by Michael Panush, Thomas McNulty, Gary Phillips and Mel Odom. Art Director Rob Davis provided the interior illustrations and the cover was done by artist Warren Montgomery. Then on Sunday morning we released the horror novel, “The Last Days of Poe” by writer R.A. Jones. Artist Chuck Bordell did interior illustrations with Adam Shaw turning in that amazing cover. Finally Monday morning saw the release of yet another R.A. Jones’ novel, “Caged Fury.” This is the third in his Jason Mankiller bounty huntre series. Artist Chris Rawding provided the cover and Neil T. Foster the interior illustrations. All three books are now at Amazon in both paperback and on Kindle. We hope you’ll check them out and as ever, Loyal Airmen, heartfelt thanks for your continued support.

And that’s it for this week Loyal Airmen. As ever thanks for stopping by, stay cool and God Bless.