WHO’S WHO IS HERE!

Greetings Loyal Airmen, we’re fairly certain you’ll recall how a few months ago we announced we’d soon be working on a truly summer special project to be called WHO’S WHO in NEW PULP. 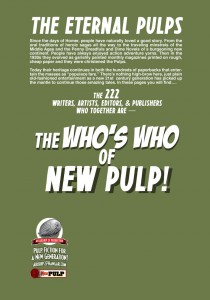 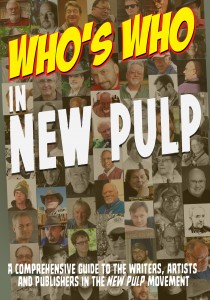 And now we are thrilled to announce the book is finished and available up at Amazon. Above you can see both covers (back cover on left – front cover on the right). Airship 27 Production’s own Art Director Rob Davis did a truly fantastic job compiling 222 entries we got in, plus lots and lots of photos and artwork to create something truly beautiful and we hope useful in the years to come as literary historians look back on these days and the rise of New Pulp. A heartfelt thanks to all who contributed to make this a truly special book. 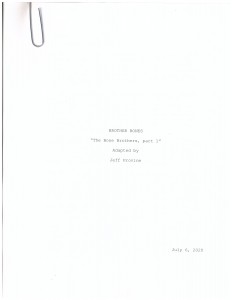 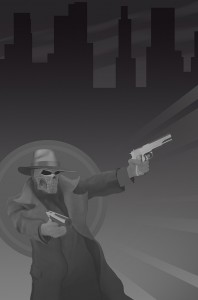 Meanwhile work continues on the new Brother Bones Web Series with writer Jeff Provine having completed Part One of Episode One, “The Bone Brothers” adapted by our story which is the origin story. In reading it, we were intrigued by the small changes Jeff did with his version to suit the needs of film and approve of them. Earlier next week we will join Jeff and producers Bryan Patterson and Eugene Hawkins for another video conference. We’ll go over the script and talk about the next step in the process. As ever, we’ll do our best to keep you all up to date. Meanwhile the new Brother Bones book, “Tales of Cape Noire” is in the final stages of production. Cover artist Michael Stribling is doing the cover and sent in the preliminary piece to the right above. There will be lots more added before the piece is completed, but we thought you Loyal Airmen would appreciate this sneak-peek. 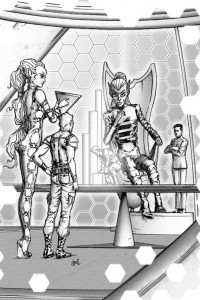 Finally, Wayne Carey is one of our finest Airship 27 pulp writers and recently he’s put his tremendous talent to creating a new space opera series. These center around a former mercenary turned trader named Anthony Michaels who flies around the galaxies meeting other alien races and having incredible adventures. Though Carey has finished two manuscripts, we’re only just now getting the first book into production and thought you’d like a peek at one of the interior illustrations that will be featured. It’s by artist James Lyle and it, and the other eight to go in this book are gorgeous. We hope we can get a cover to match them. Stay tuned, as ever we’ll keep you posted.

And that’s it for this week, Loyal Airmen. Thanks for dropping by. Be well and stay safe.