Greetings Loyal Airmen and as ever thanks for stopping by.  This past Monday we woke up to a really powerful winter squall that came up and over the foothills and hit Fort Collins like a slugger in a home run derby. 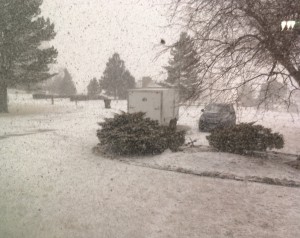 The Air Chief took his camera and took the shot to the left above. It was almost a white out and according to the radio alerts, traffic on I-25 came to a complete shut down and commuters all stopped due to lack of visibility. Thirty minutes later the snow was gone and the sun began to peek out. All that remained were the gust of winds and thirty minutes later they had subsided when we took the second photo to the upper right.  Oh yeah, living at the feet for the Rocky Mountains is always and adventure. 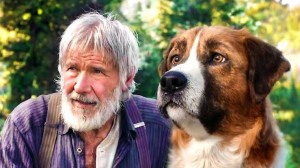 We went to see the new “Call of the Wild” movie recently. Another adaptation of the classic novel by Jack London. Lots of people we know turned their noses up to it because the studio made no secret that all the dogs and wolves seen in the film would be created via CGI (Computer Generated Images). We were a bit puzzled by that attitude especially since we’ve all been exposed to this film wizardry since the George Lucas’ Jar-Jar Binks in “Star Wars – The Phantom Menace.” Still that was an alien being and audiences were more forgiving. When viewing “Call of the Wild” the CGI is obvious enough, but even so, it works extremely well as do the actors who had to work with the process. Think back on all of the Lord of the Ring movies by Peter Jackson with lots of CGI, never mind his King Kong remake. Movie makers keep pushing the techno envelope and we’ve told it is only a matter of time before we get CGI so flawless, it would become impossible to tell the difference between it and real actor.  A close approximation was again brought forth from Lucas with their younger version of the late Peter Cushing. To say it was a bit eerie would be an understatement. So what happens when the process is perfected? Will studios be tempted to recreate deceased film stars and feature them in new projects? Imagine seeing another Marilyn Monroe or Humphrey Bogart movie? As much as that sound intriguing, is it ethical? All kinds of questions that we’ll need to grapple with as sci-fi gradually evolves into sci-facts. 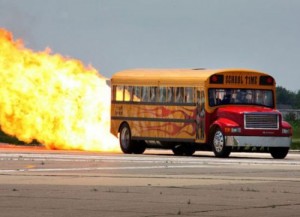 The Air Chief has been very busy of late with several new comic projects including a rather unique one that we’re keeping under wraps for a while. The artist we’re working with is the amazing Jeff Slemons and we thought we’d tease you a bit with several of his loose roughs (above). Obviously these are done to give Jeff an idea on how he will compose each page for the maximum effect of the story. Later, when he’s completed them so you can actually recognize stuff, we’ll post them here. Meanwhile the rocket-school bus is a tiny hint as to what the story is about. Oh yeah, really fun stuff. 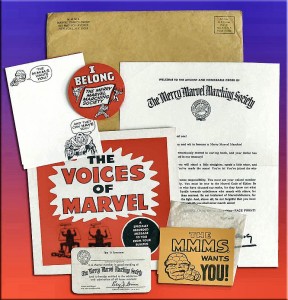 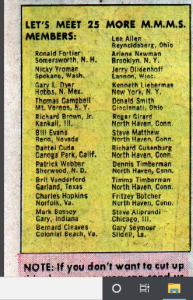 In 1964, to help promote Marvel Comics, Managing Editor Stan Lee created the Merry Marvel Marching Society, a fan club for their readers. For the small price of $1, you got a package with a membership card, certificate for framing, a sticker with Ben Grimm on it and most important of all, .45 record with Stan welcoming you and the society’s song. Pretty wild stuff for a young comic reader. Naturally the Air Chief sent in his buck and joined. On, and we forgot to mention, every single one of the thousands of kids who joined had his or her name printed in a Marvel comic book. You have to know all of then were frantic to find the comic with our names. Earlier today, a Facebook friend, Ed Chacyk, sent me the photo (on the right above) taken from a Marvel Comic. The top name on the left side column reads  Ronald Fortier – Somersworth NH.  If you don’t think seeing this page didn’t bring back a flood of fun memories. Thanks, Ed, that was most gracious of you.

And that’s it for our Flight Log this week Loyal Airmen, as ever thanks for stopping by.

TIME TO GET OUT THE VOTE