Greetings Loyal Airmen. Well this past weekend the Air Chief and Valerie had the fun of attending the local Fort Collins Comic Con. Val managed to snap a few pictures and we met so many wonderful people while there. 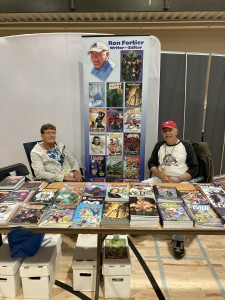 Saturday morning after setting up. One table had all our comics and the second all our pulp novels and anthologies. The crowds were great and lots of amazing costume players. 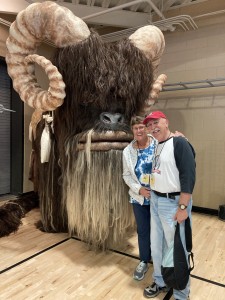 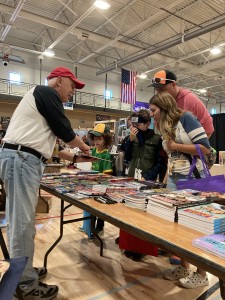 The folks at Faraway Creations were there with their animated Bantha from Star Wars. We couldn’t wait to get a picture standing along side of it. Once the doors opened and the fans starting coming, it was time for the Air Chief to “meet and greet” and show off some fun issues of Mr. Jigsaw to this nice family. 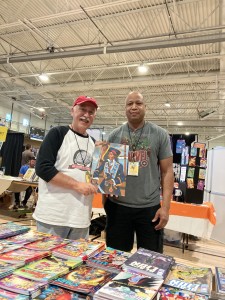 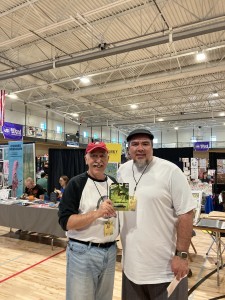 Two good friends popped over with some truly nice surprises for the Air Chief.  Above left we’re standing along artist Kevin Johnson, with who we did the Black Lion graphic novel. Kevin also did a painting for our Jezebel Johnston pirate series from Airship 27 Production and really surprised us by gifting us with the original painting. Later one of our biggest Green Hornet pals, Frank Bruso (above right) came over to give the Air Chief a classic Corgi metal Black Beauty toy car. Again, these are classics and having this now in our collection is fantastic. We can’t thank Frank enough. 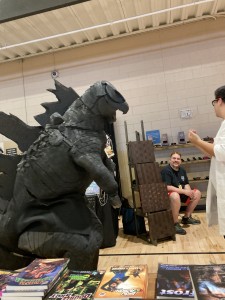 And finally, we were thrilled on Sunday when Godzilla made an appearance at the show. Valerie immediately snapped the picture above as he passed our tables. One can only imagine how hot it must have been for the poor soul in that heavy get-up. All total it was a great two days. One of the most positive aspects was our chance to hype our new comics-writing course which begins in two weeks, Wed 9th Sept at the Front Range Community College here in Fort Collins. It will be the fifth time we do the course and we talked with several attendees at the show who may be signing up for the class. Again, to all involved with Foco from Nick Armstrong to Todd Jones, great job. It was a fun time.

And while the Air Chief was at the Con, artist Rob Davis was busy whipping up Pg # 10 of “The Boston Bombers” Vol 2 Issue # 1. He’s doings such an amazing job and every page gets us more and more wound up to see this project wrapped. Going to take a while, but it will happen. 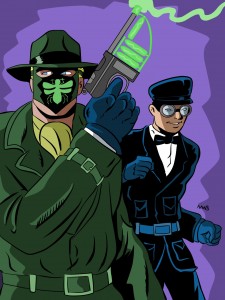 One of the biggest fans of our Green Hornet series from Now Comics. Above is a new pin-up Mike recently posted on both Facebook & Link-In. Here’s what he had to say “Now Comics published Green Hornet #1 in October of 1989. Within it’s pages, writer Ronald Fortier and artist Jeff Butler brought the Green Hornet and Kato to a new generation. I was one of those lucky guys.Here’s the original pair of Ron’s story Britt Reid and trusted friend Ikano Kato (Ron was the first writer to give the Kato family first names).Judging by some of the reaction by my recent Green Hornet pinup, I’m not alone in my appreciation of what Ron and Jeff did. Because of that, let me put this out there. Isn’t it a puzzling that other than one hardback Now Comics put out during the publication years, no one has reprinted the series since? I’d argue that Ron most definitely brought the spotlight back to the Hornet, enough for the license to be appreciated again at least.Wouldn’t it be nice to see a re-release of his original run? Just to have a nice package for those of us that grew up with it or to introduce a whole new generation to Ron’s generational approach that got so much of our interest. Or, am I in the only one?”

And then Mike goes on to talk about GREEN HORNET and KATO II – “Continuing my tribute to Ron Fortier and Jeff Butler’s GREEN HORNET series of the early 90s. Also, I’m wanting to show the fine folks who currently publish Green Hornet comics, Dynamite there’s interest in seeing the much beloved series reprinted. The approach Ron and Jeff took in their series was treating the original radio/serial Green Hornet and the short lived 60s series as one universe. Going as far as actually using the likeness of stars Van Williams and Bruce Lee as Britt Reid II and Hayashi Kato. The Hornet identity is established here as being passed on by uncle to nephew. Britt II asks his uncle to continue the legacy. While Hayashi is the eldest son of the original Kato, Ikano.  We get some fun adventures establishing the duo in both action and family life. The very personal nature of the comic’s family dynamic is what I’ve always thought made it a must read for me. I invested in the characters and Ron led me through their lives. Side note: To my understanding, Van Williams was a great fan of the series and appreciated being thought of.” 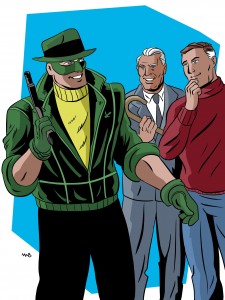 Mike continues – “GREEN HORNET III – Alan Reid -The heir apparent to the Green Hornet legacy, Alan Reid would train with Hayashi Kato from a young age to one day inherit the mask. Taking over from his Uncle Britt, Alan would meet tragedy on his very first case. Leading up to his taking on the Green Hornet we’re given a few issues to get to know Alan and his younger brother Paul, as they would come to live with their Uncle Britt after the death of their parents. I remember being quite shocked and touched by what happened to Alan as Ron’s story rolled out.Alan’s costume was designed by Steve Erwin, who was supposed to work on the series with Ron. But other work prevented him from doing so.Again, please help me spread the good word about this series in the hope that Dynamite might reprint the first series.”

Wow, thanks so much, Mike. Personally the Air Chief has often wondered why no one at Dynamite ever thought to reprint the run we did with artist Jeff Butler. Especially the highly critically acclaimed four issue mini-series, “Sting of the Green Hornet.” Who knows, maybe if enough folks respond to Mike’s urging, someone at Dynamite will take notice.

BEYOND THE STARS Book # 2 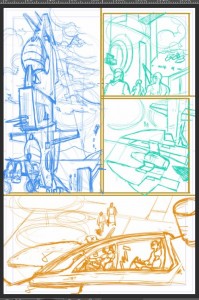 Meanwhile artist Andrea Bormida turns in roughs of Pg # 12 of “Beyond the Stars” # 2. The team is assembling from different parts the empire. The Air Chief so loves this page.
And that’s it for this week, Loyal Airmen. As ever thanks for stopping by and see you next week.
Ron Over & Out!