Greetings Loyal Airmen, we hope your Christmas last weekend was the best one ever. As we look to jump into the New Year 2023, we’ve all kinds of hopes and wishes. But first let’s look at the some of our Santa goodies. 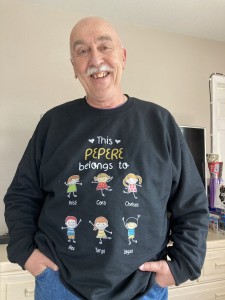 As we’ve said often enough here, family is everything to us. Val and the Air Chief have five amazing grown up children and six super grand kids. So Val went and had this custom made sweatshirt made for us. Pepere is French for grandfather…and here represented from left to right, according to their ages are our Six Super Grand Kids: Kristi, Cora, Chelsea, Alex, Taryn & Logan. We love them all so much and this shirt is something truly special to the Air Chief. Oh, yeah. 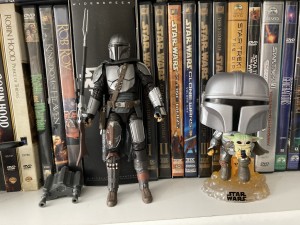 Our family knows the Air Chief loves action figures and we’ve quite a collection doting the book shelves in our office. So it was a wonderful Santa surprise to unwrap a really awesome Madalorian action figure which you see above to left. But the funniest surprise was later opening a box with a Funko bobble head version of the character (above to the right) who also comes with the baby Grogu in his arms. They are both awesome toys. 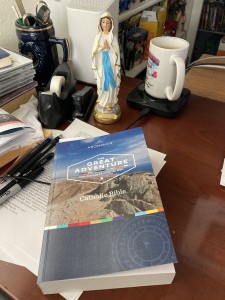 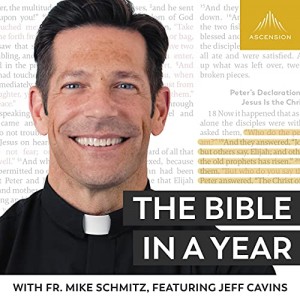 Over a year ago, while surfing You Tube, we discovered a daily podcast series from Ascension Press titled the Bible in a Year hosted/narrated by Father Mike Schmitz. Father Mike is such a wonderful, humorous soul devoted to his ministry and as we began to watch episodes daily, it didn’t take us long to get hooked. As we recall, we’d come in towards the end of that first year.  So…after we’d reached the end of the program, we simply went back to Day One on You Tube and started from the beginning. One of the marvels of this series is the accompanying Great Adventure Bible put together by the folks at Ascension under the guidance of bible expert Jeff Cavins. Their approach is to cross-reference books from the Old Testament with those from the New to ultimately reveal a linear narration that is God’s beautiful story of salvation history. From Adam and Eve’s original falling to sin to the miraculous incarnation of Jesus to save mankind…once and for all.  Thus, our kids, knowing of my affection for this video series, gifted me with a copy of the Great Adventure Bible. We are wicked excited as it will be a tremendous aid to our ongoing bible studies. As for Father Mike’s Bible in a Year series, if any of you have ever wanted to read the bible, we recommend it highly. 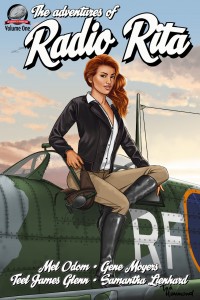 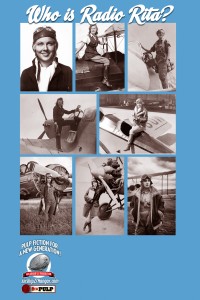 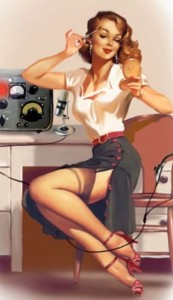 Just before Christmas, we managed to release our 22nd (and last) title of the year. Kind of fitting that we’d do 22 books in 2022. Ha. This was of personal interest to the Air Chief as it features a fictional character we created as whim to announce our You Tube video podcast. We’d found an old classic 1940s pin-up picture on line (at right above) and called her Radio Rita, the manager of Hangar 27 where all the magic of Airship 27 happens. Eventually, several of our writers started asking if we’d ever do a book starring this lovely redhead. The idea sounded like fun and we came up with this concept wherein we’d write a very brief bible in regards to the Rita’s character…and let each writer who signed on to fill in the rest of just “who” she was. Of course this would immediately have each writer doing a “different” version of Rita and that’s exactly what transpired. Vol One features four Radio Ritas as envisioned by writers Mel Odom, Gene Moyers, Teel James Glenn & Samantha Lienhart. Rob Davis provided all the great interior illustrations and Ted Hammond that gorgeous front cover (to left above). The girl fliers collage is the back cover. “The Adventures of Radio Rita” is now available at Amazon in both paperback and on Kindle. We think it’s something special and we hope you’ll give a look. 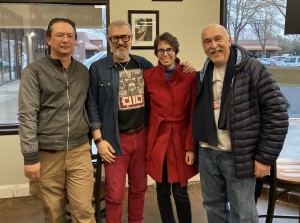 Several days ago, the Air Chief received a surprise e-mail from a woman named Randa Hassan. She’s French and she and her husband, Sherif Negati, were in Fort Collins visiting her mother for the holidays. Sherif is a big comic book fan and they were hope to make contact with any comic book professionals while here. The Air Chief wrote back suggesting we all hook up at the local comic shop and they agreed. So on Wed afternoon, the Air Chief, along with our pal, pro letterer James Gaubatz, had the real pleasure of meeting and getting to know these truly wonderful people. Sherif recently gave up a good paying IT job for an oil company in France to start writing/drawing his own comics. So for an hour and a half  the four of us talked comics, pros and cons, those here in America and the French comics back where they live. It was a fun, informative meeting. Sherif promised to send us sample of his work when he gets home and asked the Air Chief to be totally honest in our critiques. Which we’ll gladly do. We snapped the picture above. (Left to right is James, Sherif, Randa and the Air Chief. Like to think we made two new friend today from way across the globe.

And that’s it for our last Flight of 2022 Loyal Airmen. Thanks ever for following this blog all year long, we truly appreciate your interest and support of our humble activities and ramblings. Here is wishing all you a truly wonderful and great New Year. God bless you all.