Greetings Loyal Airmen, as you are reading these words, the Air Chief and Art Director Rob Davis are in Columbus, Ohio about to kick off this year’s wonderful Pulp Fest convention. We’ve been coming to this show ever since it started and always have a great time there.  This is year is going to be special as we are going to have 15 copies of our limited collector’s edition of our new novel, “Holmes & Houdini” as written by I.A. Watson.  The original plan for this book, back when it first went into operation was to have DC graphic artist Chad Hardin do the cover for us, with Rob doing the interior illustration. Well circumstances beyond our control made it impossible for Chad to get his cover done in time for the con and so Rob hit upon the idea of doing a special cover (that he would do) and printing up a limited number of copies to specifically have for Pulp Fest. 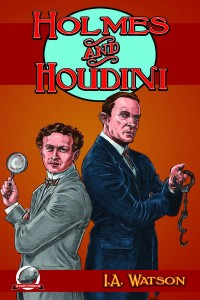 And here is that Rob Davis cover.  We had 15 copies printed up.  Once we’ve sold these, we will not be printed any others.  So those people fortunate enough to snag one of these at the show ill have a true collector’s item as promised. Rob will personally sign and number each  (ala #1 of 15 etc.etc.).  Later down the road, when Chad does turn in his official cover, we will release the book.  If you’d like to actually hear the story behind this special event, take a listen to our recent Episode # 17 of our Airship 27 Podcast found here on You Tube…(https://www.youtube.com/watch?v=RNXEDTJz5iA) 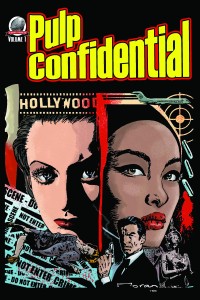 For a few years now our Airship 27 pulp readers have been asking us to give them a real mystery crime anthology.  Well, we are thrilled and delighted to announce the release of “Pup Confidential,” vol one – a bonafide pulp mystery anthology.  This first volume contains a lengthy novella by Tim Bruckner called “Scared Pretty” and deals with a serial killer in 1930s Hollywood. This is followed by “The Missing Beauty” a modern day thriller in which a British account goes to Bangkok on an assignment and is soon caught up in kidnapping and murder. Both are great reads and the art, to include interiors and cover are all by the amazing Rob Moran. We hope you’ll try out it. As ever it’s now available in hard copy from Amazon and with a few days will be on Kindle. Oh yeah, we’re excited about this one. 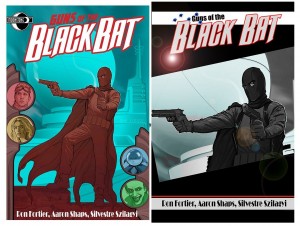 Remember that new Black Bat comic we told you about at the start of the year, which Ye Old Air Chief penned for Moonstone Comics.  Well, it was due out in April but an unexpected snafu at the printers caused it to be delayed.  This week it finally came out and is should be available at your local comic shops soon.  It’s called “Guns of the Black Bat” and is the first of a three issue mini-series.  Volume one has the Black Bat recruiting Airboy, the Moon Man and the Golden Amazon to help him fight Nazis saboteurs.  We hope you’ll check it out. 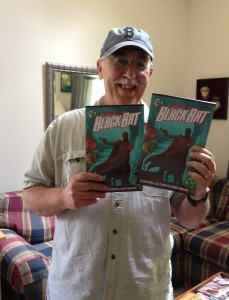 And since writing the previous section above, the post office delivered our copies.  Be aware, there are two covers, and at the bottom of each the credit listing should be Ron Fortier – Erick Esquivel – Paul Delacroix.  Again, we hope all you Loyal Airmen will see these in your comic shops next week.

And that wraps up this week’s Flight Log.  Time to finish packing the Airship 27 for our flight to Columbus.  See you there.