Greetings Loyal Airmen, we’re kicking off this week’s entry with some awesome new concerning a series near and dear to the Air Chief.

In 2014, Airship 27 Productions published Robin Hood – King of Sherwood by I.A. Watson; the first in his trilogy reimagining the saga of fiction’s greatest hero. The two subsequent sequels, Robin Hood – Arrow of Justice and Robin Hood – Freedom’s Outlaw soon followed to the critical delight of fans everywhere.  A few years later, a fourth volume was released containing a collection of Watson’s Robin Hood short stories titled, Robin Hood – Forbidden Legends.  Now, at along last, the entire four volumes are offered in this special Omnibus Edition containing all the previous published works. Also included is The Dead of Robin Hood, the poignant conclusion to the saga never before in print.  With each new volume, I.A. Watson put forth a truly fantastic adventure willed with all the action and romance one would expect from a Robin Hood story. Then, to top that all off, he set the darn thing against a real, historical background. The notes in these book are enough to teach a course in Old World British History and politics.

The new Omnibus edition  contains all 52 of Art Director Rob Davis’ beautiful interior illustrations and features his brand new cover spotlighting Robin and his true love, Maid Marion.  That is 660 pages of fun, suspense, adventure and thrills. Believe us Loyal Airmen, you won’t be disappointed. Available now at Amazon and it is a great Christmas gift for the readers in your family. 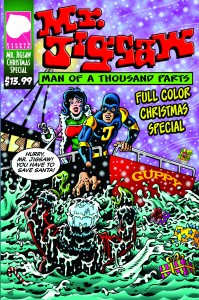 On the comic book front, we are thrilled to announce our giant 56 pg full color MR JIGSAW CHRISTMAS SPECIAL is now available at Amazon. It features a cover by Mort Todd who also colored the entire book. The brand new story is “Miracle on Christmas Island” and has our Jiggy come to Santa Claus’ rescue when Santa has splash down trying to deliver toys to a distant off-shore island village during a savage winter snow storm. We think it is something special all our Jiggy fans will love. Then the remainder of the book reprints three past stories never before done in full color. We kid you not, this book is a comic book treasure.

And that’s it for this last Flight Log before Christmas.  We want to wish all our Loyal Airmen a safe, super wonderful Christmas and hope you all can spend it with those you love. You will all be in our Christmas wishes