Greeting Loyal Airmen, it has always been our belief that after family and friends, no one influences us more in this world then our teachers. From our early formative years in grade school, on to high school and college, good teachers have the ability to shape our thoughts and thus our actions, setting us on paths we might never have dare to try. 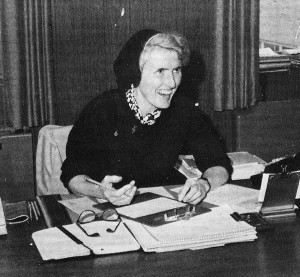 Such was the case sixty-three years ago when a shy, nerdy 13 year old named Ronald Fortier walked into his freshmen high school homeroom class and was greeted by a teaching sister of Notre Dame named Sister Raymunda. Little did he know how four the next four years she would inspire him. She was both an English and Math teacher. It was in the former that she taught us and she did with so much enthusiasm she made literature magic. We’d already been an avid reader but it was Sister Raymunda who somehow saw in us that tiny spark of a dream to be a writer. Then she proceeded to fire it up by her constant encouragement and support. Every day in her class was an adventure. We would go on to have her for English three of our four years at St. Thomas Aquinas High School. The memories of those years still echo warmly in our thoughts. Shortly after we graduated, Sister Raymunda was made principal as seen by image to the left. Later, when reassigned, she’d go on to teach at many schools throughout New England and even in her later years working with immigrants in nigh school to help them learn the English. We’d guess in her career she must have touched the lives of thousands of young people. Touched them in her special, loving way. The picture on upper right was taken in 2017, at a retirement home in Conn. where she and the other resident nuns were visited by the then St. Thomas Choir. Sister Raymunda was so thrilled to be reunited by who she called “Her Saints.” A few days ago, we learned that she had passed away at the age of 95, gone home to her Loving God. Though saddened by that news, we believe in our hearts that through God’s mercy, we’ll see her again one day. After all, He was blessed us with her in the first place. Rest well, Sister Raymunda. 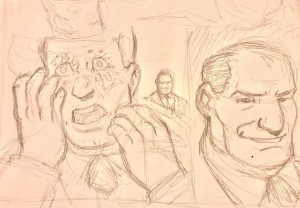 Two weeks ago, if you Loyal Airmen stopped by while the Air Chief was on vacation in Florida, you would have seen the sneak peeks at several pieces of artwork from the new Black Bat graphic novel we wrote and that the amazing Mike Belcher is illustrating. Above is a snipped from a page in progress and is one of the most vital moments in the story of Anthony Quinn, the battling District Attorney who will become the hooded avenger. We’re sure you pulpsters out there can deduce what is being shown. 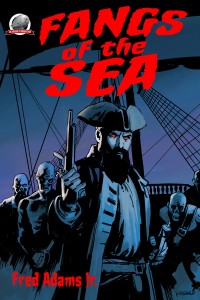 Finally we are very excited to announce the release of our newest pulp thriller, FANGS OF THE SEA by writer Fred Adams Jr. This one is about vampire pirates and is pure horror-adventure as only Mr. Adams can provide. Our own Rob Davis did the interior illustrations and the amazing Adam Shaw that beautiful creepy cover you see above. As ever it is available at Amazon in paperback and on Kindle. Thanks always for your support, Loyal Airmen.

Which wraps up this week’s Flight Log. Thanks for stopping by and we’ll see you all here next Friday.