Greetings Loyal Airmen, this week we are thrilled to announce the release of fourth adventure in the weird western series created by the late Mark Justice.

As most of you know, Mark Justice was a talented genre writer and radio personality from Flatwoods, Kentucky. Several years ago he wrote a weird western novel called THE DEAD SHERIFF – ZOMBIE DAMNATION. A year or so after it had been published, Mark reached out to us asking if we’d be interested at Airship 27 in doing our own edition of that book and then continuing the series. We were thrilled with the idea and agreed to it. Then within months of all this, Mark passed away suddenly leaving all of us in shock. After a while, his wife, Norma Kay, reached out to us asking if we were still willing to go ahead with Mark’s wishes. You all know the answer to that question. Above is an image of the first Airship 27 Dead Sheriff book. We were so happy to fulfill Mark’s wish. 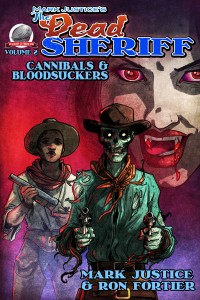 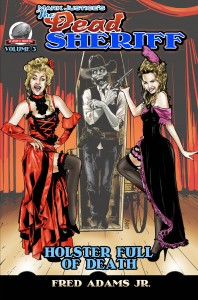 Then Norma Kay told us Mark had actually started a second Dead Sheriff novel and would we like to see it. Within days, the Air Chief was reading this new unfinished manuscript. It was filled with the same kind of zane, bizarre horror adventure that was the hallmark of Mark’s writing. Realizing it had to be completed, we took it upon ourselves, and with Norma Kay’s blessing, to finish and publish book # 2, CANNIBALS & BLOODSUCKERS.  It went on to become another success for us. It was clear to the Air Chief, that our readers really enjoyed these characters and would support more adventures with them. We reached out to our pal, and prolific New Pulp writer Fred Adams Jr. asking if he’d be interested in writing a new Dead Sheriff yarn. The result was the wonderful book # 3 – HOLSTER FULL OF DEATH which was released last year.

Well, having established an on-going series, it was time recruit another writer with the chops to handle these weird characters and this time we tapped Michael Housel. Michael’s written two novels for Airship 27 featuring his own mystic hero, The Persona, and so we knew he was comfortable exploring strange and exotic plots. Happily he signed on and this week we released Dead Sheriff # 4 – PURITY by Michael Housel. It features interior illustrations by our own Art Director Rob Davis and a beautiful cover as seen above by Michael Youngblood. The book is available in paperback from Amazon and on Kindle as well. If the weird wild west is your cup of tea, we think you’ll love this new entry. As ever, thanks so much for your continued support Loyal Airmen and yes, there is a # 5 on the way! The Dead Sheriff lives on! 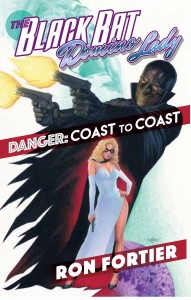 Finally, we’ve been informed that our BLACK BAT – DOMINO LADY – DANGER COAST TO COAST comic collection arrives in comic shops next Wed, 25th Nov.  We hope you’ll check it out. And that’s it for this week, Loyal Airmen. Happy Thanksgiving to one and all, don’t eat too much turkey. As ever, thanks for stopping by and we’ll see you back here next Friday.