Greetings Loyal Airmen, Valerie and the Air Chief celebrated a very quiet New Year’s Eve. First by attending evening mass and then home for Chinese take-out. All was going fine until we received a really sad e-mail as explained below. 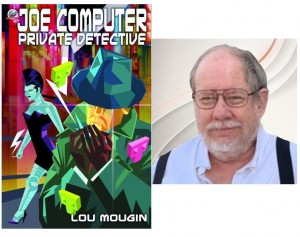 Airship 27 writer Lou Mougin 27 Nov 1954- Dec 31 2022 passed away yesterday at the age of 68. Though we never met face to face, we became friends online and last year we published his first JOE COMPUTER Private Detective. Joe loved it, especially the art by Fer Calvi. Below is the bio he gave us for that publication. I loved Joe’s humor that came through all his e-mails. He will be sorry missed by the New Pulp community. God bless you, my friend and may you rest in peace.

LOU MOUGIN – despite rumors to the contrary, is a writer.  In prose, he’s written the Frankenstein novel, MONSTER IN THE MANSIONS, and several other items for ProSe Press.  His first Joe the Computer story debuted in Airship27’s LEGENDS OF NEW PULP FICTION.  SECONDARY SUPERHEROES OF GOLDEN AGE COMICS, a history of lesser-known 1940s comic heroes, has been published by McFarland Books.  In comics, his current gig is scripting horror stories for Warrant’s THE CREEPS, SHUDDER, and VAMPIRESS CARMILLA.  He’s also written stories for Marvel, Eclipse, AC Comics, InDellible, Claypool, Lucky, and others.  (What others?  At this point, he’s not sure himself!)  This is his first ever detective-type book.  If you buy it, he’ll be exceedingly happy.  If not, he’ll probably cry for a week. 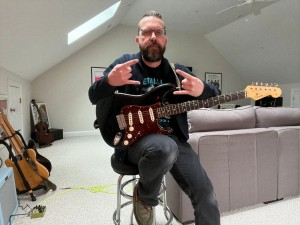 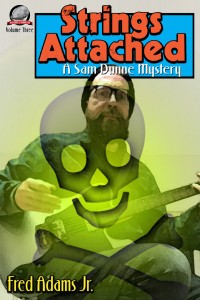 On a much happier note, while wishing all in the family a Happy New Year, our son Kevin sent along this new picture above doing what he loves best, playing one of his guitars. Kevin’s always had a gift for music and though he spends his days buy as the manage of a good sized supermarket in Massachusetts, his nights and free time are for his music. As some of you will recall, we even put Kevin on the cover of the new Sam Dunne novel by Fred Adams Jr. that we also released last year.

And so 2023 kicks of with both sad and happy moments as is typical in life. We cherish our loved ones and miss those who have passed. Amen. 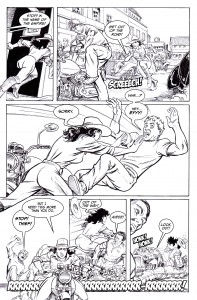 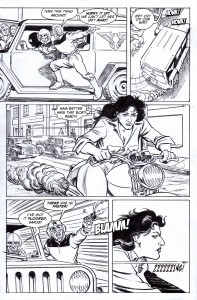 Setting aside time during the holidays, Rob Davis devoted his energy to get issue # 1 of the new Boston Bombers series wrapped.  Above are his just turned in Pages 17 & 18. With only a few more to go before the end, these will be our last sneak peeks. With fingers crossed we’ll have the comic out within the next few months. We are super thrilled with the work Rob has done here and think it is some of his best. Stay tune for updates.

BEYOND THE STARS  Issue # 2 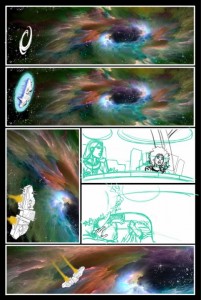 Artist Andrea Bormida is now finished with Pg # 17 of Issue # 2 of our sci-fi comic book adventure “Beyond the Star.” Looking awesome. Our team of Science Warrior about to traverse an unstable Nebula. 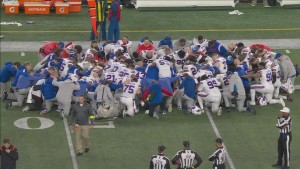 During Monday night’s football game between the Buffalo Bills and the Cincinnati Bengals, Bills safety Damar Hamlin suffered heart failure and collapsed. Medical staff rushed to the field to begin CPR and within minutes an ambulance was carrying him away to a nearby trauma center. As it drove off, his teammates fell to their knees in prayer to Our Lord Savior Jesus Christ and prayed. The Air Chief will remember this scene as long as  he lives. In minutes, a team, a stadium full of fans and millions watching on TV prayed. And we will continue to do so until this young man recovers. Amen. 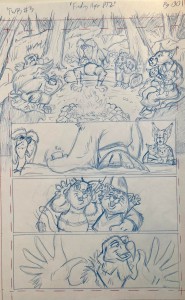 With the release of “The Wooden Blade” issue # 2 last year, Olivia DeGaine and the Air Chief are now hard at work on issue # 3 of the adventures of Raizee the Ram and his vulture sidekick Orai. Above are Olivia’s first roughs and layouts. Wahooo!! 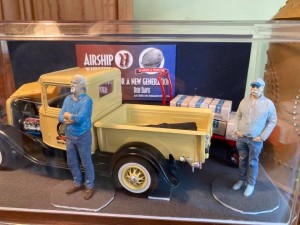 Was checking You Tube recently and discovered something great. Seems our last Podcast Episode # 89 has to date received over 100 views.  Wowser!! We generally get about 70 to 80 views. So whatever happened, we have no clue but still Rob and the Air Chief want to thank all of you Loyal Airmen for tuning in and obviously telling your friends about the show.

And that wraps up this Flight Log, Loyal Airmen. As ever thanks for dropping by and we’ll see you back here next Friday.