Greetings Loyal Airmen, and welcome to June. A couple of our current comic projects are moving along nicely and we’ve another great drawing from artist Andrea Bormida featurning cast of Beyond the Stars. But first, a certain sword wielding Ram deserves our attention. 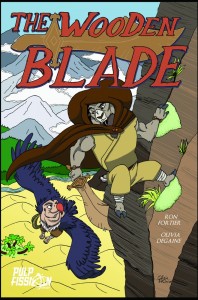 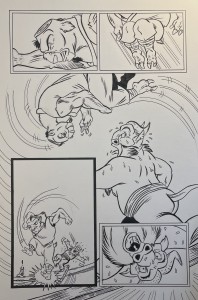 At the same time, our dear friend and awesome artist, Olivia DeGaine continues work on wrapping up issue # 2 of our Raizee the Ram series, The Wooden Blade.  Above to left is the now familiar cover to issue # 1, and to the right is her progress on Pg 7 of the second issue. She’s as always doing a fantasic job and we can’t wait to see the final book.

And super draftsman Cesar Feliciano just completed Pg # 34 of our JIN  & TONIC\K first issue. This one dramatically presenting for the first time ever, Russian super soldier, Darya Tonikova…in her embryonic artificial womb.  Talk about a money-shot. While to the right is an old sketch Cesar had done up way back in 2018 when this project was also in its infancy. We are still on the hunt for a super talented colorist to join out team. Stay tuned, Loyal Airmen.

Those of you who were so generous to support the Kickstarter campaign for this comic, will know that one of the very first Stretch Goals to be met was that a Beyond the Stars trading card would be produce and go out to everyone who pitched in.  Above is the finished image for the card, which is now in its final stages of production. It features Master Scientist Ar-Nall with Cyborg Science Warrior IS-Brt (0n left) and Chief Science Warrior Kal (on the right). There will be added logo on this front and text on the back. Gonna be a nice collectible when finished. Oh, yeah.

A PUZZLE OF SORTS 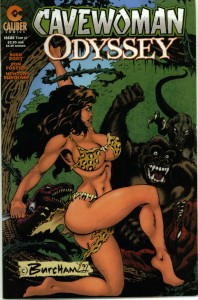 So we are digging through the image files on very old CD disc this past week when the Air Chief stumbles upon the cover above…and started wondering what it was? Obviously it has our name on the cover, but boy are the memories vague. Seems like ages ago, the late publisher of Caliber Comics, Gary Reed, approached us about writing a series of Cavewoman issues. Cavewoman was/is the brainchild of comic creator Bud Root and at the time, very, very popular. So we said,”Sure, why not.” We established a correspondence with Bud which led to the both of us agreeing to go to a Monster Convention in Baltimore that year. We shared a room and got to know each other. The other thing we remember about that show was finally getting to shake hands with the great Forrest Ackerman of Famous Monsters of Filmland.  Then some time after our return home to New Hampshire we apparently did write a script which Gary then had an artist named Rick Burcham illustrate it and that’s it above. Dang, but we have absolutely no recollection of the script itself or if we even have any copies of this comic. All too weird. Guess we’ll have to go digging into the boxes one of these days. It’s what happen when you’ve written as many scripts as we have.  Hmm, we wonder. Any of your Loyal Airmen remember this one at all?

That’s it for this week, as ever, thanks for stopping by and God Bless.