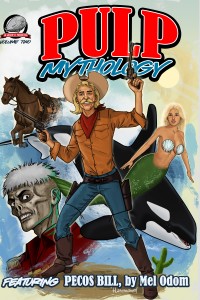 A few years ago we launched a series that would be based on myths from around the world. It was a lot of fun and our readers enjoyed enough for us to do a second.  PULP MYTHOLOGY Vol 2 features three brand new tall tales. The first is a story of the might Heracles by Samantha Lienhard. The second features the Russian witch Baba Yaga by Michael Panush. And then topping of the entire package is a rousing Pecos Bill novella by Mel Odom.  Our dear friend Gary Kato provided the black and white interior illustrations and the cover, based on these, is by the super talented Ted Hammond. The book is now available at Amazon in both paperback and on Kindle. Trust Loyal Airmen, this one is tons of fun. As ever we thank you for your support. 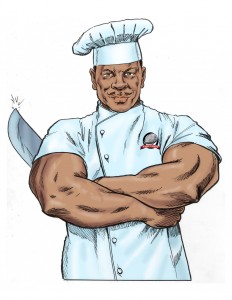 Speaking of Tall Tales, here is one we hope you Loyal Airmen will really enjoy. Way back when the Pulp Factory group was started as a way to connect pulp creators and their fans, the Air Chief became the site moderator when it was up on Yahoo. And whenever we know a member was having a birthday, we would let everyone know about it. When Yahoo closed down the site and we were forced to move to a Pulp Factory Page, lots of things changed, i.e. our membership skyrocketed from 160 to almost 300 now. Of course being still aware of members’ birthday, we began posting pictures of birthday cakes when announcing their big day. Then one day, out of the blue, we started talking about how these cakes were made in the Pulp Factory HQ kitchens by a famous trained cook and we called Chef Pierre. From that point on, every time we mentioned a person’s birthday, we add a bit about Chef Pierre’s joy in cooking up these treats. As time went on, we added some background to the character, ala the fact he was ex-military, as superb martial artist without peer and when not cooking, a globe-trotting adventure of renown.

Ultimately many of our PF members began asking questions about the Chef, his likes and dislikes, his past adventures and would we ever one day see him written in up a pulp tale. All which inspired the Air Chief to contact Airship 27 Art Director Rob Davis about the possibilities of his bringing Chef Pierre to life in a sketch.  And today he did just that. Above is the Pulp Factory’s very own famous CHEF PIERRE, and man at ease in a gun battle, romancing exotic beauties as he is in his stainless steel kitchens at PF Headquarters. What’s next for this amazing character. Only time will tell, but we assure you, it will be a very TALL TALE.

And that’s our Flight Log for this week, Loyal Airmen. As ever, thanks for stopping by and we’ll see you all back here next Friday.