THE FRIENDS YOU MAKE

Greeting Loyal Airmen, as many of you are aware, social media and things like Facebook aren’t for everyone. There are lots of bad things about such sites and they are well documented. But at the same time, there are positives…such as actually getting to meet really good people who share one’s likes and beliefs. 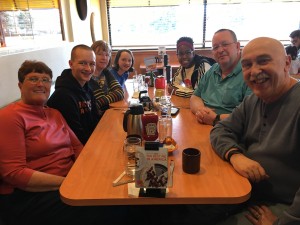 Such was the case last Saturday morning. Jim Clay is a fellow the Air Chief met on Facebook about a year ago and we soon realized we had quite a few things in common; never mind that Jim quickly became a fan of our efforts at Airship 27 Productions. Then last Thursday he notified us that he was back in Fort Collins where he and his family had lived years ago before moving to Illinois. Upon hearing this, we suggested we meet for breakfast at a local eatery and that get together transpired in such a wonderful way. Above is a photo taken by our waitress, going around from the left you have Valerie, Chancellor Clay, Mom Tracy, daughters Christiana and Katrina, then Jim and lastly the Air Chief. We spent a couple of hours chatting and getting to know each other. It was a truly awesome meeting. The Clays are truly special people and ones we are so blessed to now call friends. Here’s hoping we can do this again in the future. And Jim, that will be our treat. 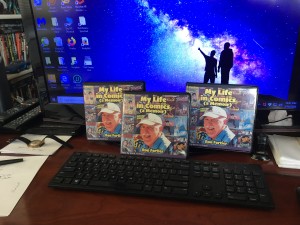 A few days later the mail delivered my audio-book sets from Radio Archives. Reader Mark Finfrock does such an amazing job in capturing the essence and real sense of excitement we wanted to share with our readers when writing this Memoir. We’ve listened to the first two, of five, hours and they are just so much fun. Should any of you Loyal Airmen be interested in pick this up, merely go to (www.RadioArchives.com) Tell them the Air Chief sent you.

Years ago, the Air Chief co-authored three books with the late Ardath Mayhar, our dear writing mentor. The only one ever published by Airship 27 was WITCHFIRE. Then some nine years ago it went out of print. Something we’d overlooked until recently. Upon realizing that, we contacted Art Director Rob Davis who immediately set about putting together a brand new edition and getting it back up at Amazon where it is now and will hopefully reside for many, many years to come. It’s back available in paperback and on Kindle, as well as an audio version from Audible.com. In looking over the old reviews the book initially received upon it’s first release, we’ve started getting the temptation to revisit these characters again.  Hmm, we’ll see where that goes. Oh, and that painted cover and all the interiors illos were done by Rob.

And lastly for this week, our latest new Airship 27 Productions’ title has just been released.  “Jezebel Johnston – Sisters of Vengeance” is the sixth volume in writer Nancy Hansen’s wonderful, action packed pirate queen saga. Rob Davis, beside doing the interiors, as he has done for all previous five books, also contributed the beautiful cover you see above. If you like authentic pirate tales of adventure, you will love the Jezebel Johnston books. Available now at Amazon and as ever, thanks so much for your continued support.

Thanks for stopping by and see you back here next Friday.