Greetings Loyal Airmen. Due to the recent virus pandemic, the promoters of this year’s Windy City Pulp & Paper convention have opted to reschedule the show. Now it will happen between Sept 11 – 13th. This of course due the health restrictions of large gathering. Hopefully by Sept this will be behind us and the show ill go on.

In lieu of the Windy City Pulp & Paper postponement until Sept., this year’s Pulp Factory Awards Winner will be announced via a special video and Press Release. Once the actual awards have been made and addresses for the winners obtained, the Air Chief and co-host Rob Davis will do a short video announcing the winners of each of the five categories. At that same time, the actual awards will then be mailed out to each recipient. Again our thanks to Van Plexico and Gordon Dymowski for a great job handling the voting.  As soon as the video is up at You Tube, we will circulate the link and Press Release everywhere on line.

And now for some better stuff. 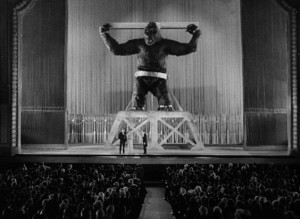 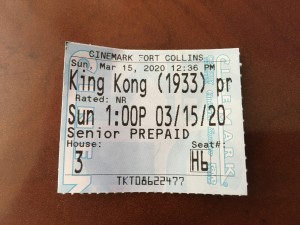 Our father, George Fortier, loved movies. When we were 5 yrs old he took us to a re-release of the original 1933 monster classic, KING KONG. That was in 1950. Being the first movie we ever saw, it mesmerized us. That story about the giant gorilla taken from his lost island kingdom, brought to New York City in chains only to be shot off the Empire State Building at the end. Even at 5 we actually felt sorry for Kong coming out of the theater. That movie would change our lives forever and to this remains our all time favorite. We’ve since written about it, owned it on video tape, then Blu-Ray DVD. We must watch it at least twice a year. Never ever thought we’d ever get to see it up on the big white screen again. Well, thanks to AMC and Fandango, that happened today as Valerie and the Air Chief attended a special showing of the 1933 KING KONG at our local theater. Honestly, it was as if we’d been transported back into time and we could feel the ghost of our Dad sitting there beside us throughout the filming. It was beautiful and yes, we still, at the end, cheer for the Big Gorilla…though we know he can never win. 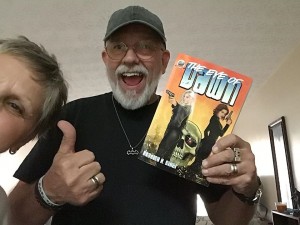 As most of you who listen to our Airship 27 Podcast show, Rob and the Air Chief work hard as hell in finding talented artist like Clayton Murwin, seen here, to work with us. Sadly we are a small publisher and pay is pretty much peanuts. Then we see pictures like this one and the obvious joy and delight on Clayton’s face and real glad we keep at it. Clayton picked up copies of EYE OF THE DAWN, the book that he illustrated for us and was written by Brad Sinor. As we tell all our great creators, writers and artists, we promise then that their work will appear in truly beautiful fashion for all the world to see. We’d like to think that has value. Thanks Clayton, for sharing that belief. 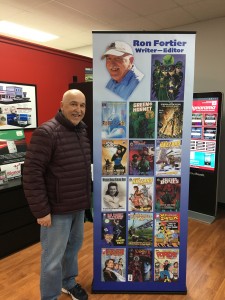 After ten years of usage, our old convention banner was really starting to show some wear and tear. To that end Valerie suggested we get another one done up. Rob Davis was gracious enough to put together a new collage of comic and novel covers and we took it to the local Signarama here in Fort Collins where they made the gorgeous new banner you see above. We absolutely love it. Now we’re hoping there will be cons to take it to later in the year. Wish us all luck.

That’s it for this week, Loyal Airmen.  We pray all of you are safe and will do what is needed to get past this crisis. America has weathered far greater challenges in the past and we’ll all come through this stronger than ever. God bless you all.